The Bunny Squish is a cute, cuddly, and very squishy, free crochet pattern on Moogly! Perfect for Easter or any bunny lover – and quick to crochet in Bernat Blanket! 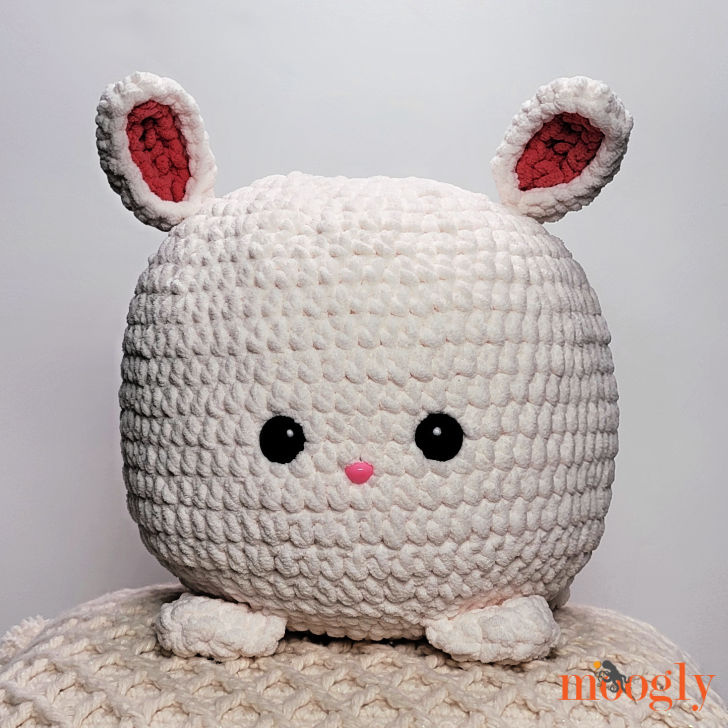 Just like the Octopus, Narwhal, and Squid Squishes, the Bunny Squish can be filled with a microbead pillow ball, or you can use Fiberfill. And by using Bernat Blanket, it works up just as fast, and just as cuddly!

I’ve used a few of these balls now, and once in a while I do come across one that’s overfilled and bigger than it’s supposed to be – I just open up a seam, remove the extra beads, and sew it up again. 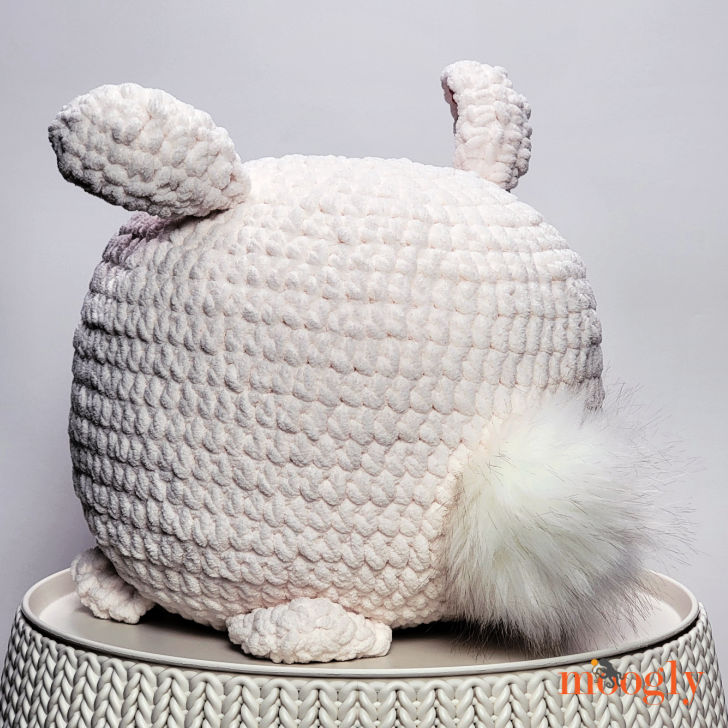 In addition to the yarn and stuffing, you can use safety eyes and nose as shown, or you can use buttons – or a bit of yarn to embroider on the face. And then there’s the tail! I used a faux fur pom pom, but you can make yours with yarn if you like. Make your bunny your own! 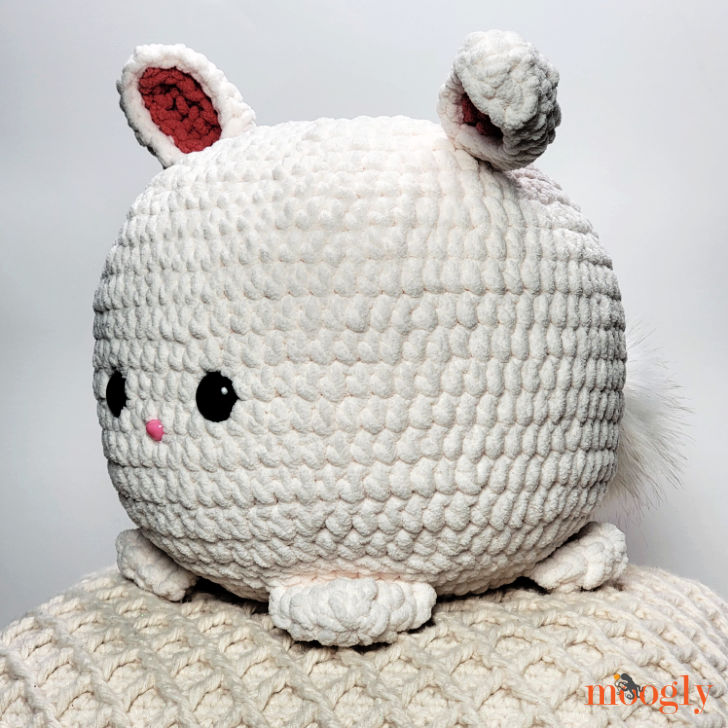 Cute and Cuddly for Kids and Adults

This bunny pillow is fun to make – and so fun to squeeze! I used safety eyes and a nose, but this pattern has not been tested for safety for children under 3 years of age. If you are crocheting it for a baby or toddler, you may wish to embroider on the face and make sure that the ears are sewn on quite securely. If using it as a photo prop, be sure not to leave the toy with a baby unattended. 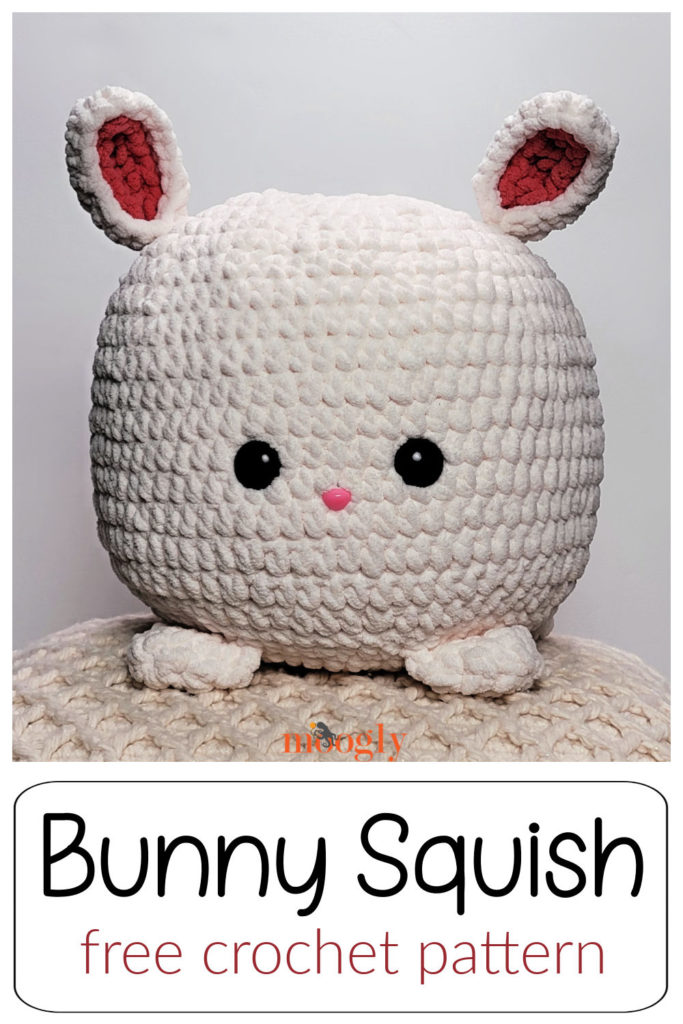 Add this pattern to your Ravelry Queue and Favorites

Working in a Spiral

Rnds are worked in a spiral.

Do not ch 1 at the beginning of a rnd or join any rnds with a sl st unless specifically directed in the pattern.

Move a stitch marker along the first st of each rnd as you work to keep track of your progress.

Please note that some pieces switch between Rows and Rounds.

Step 1: Insert Ear Piece #2 into Piece #1, and use the long tail of Piece #2 to sew it on. Be sure to stitch so that Color B does not show on the other side of the ear. 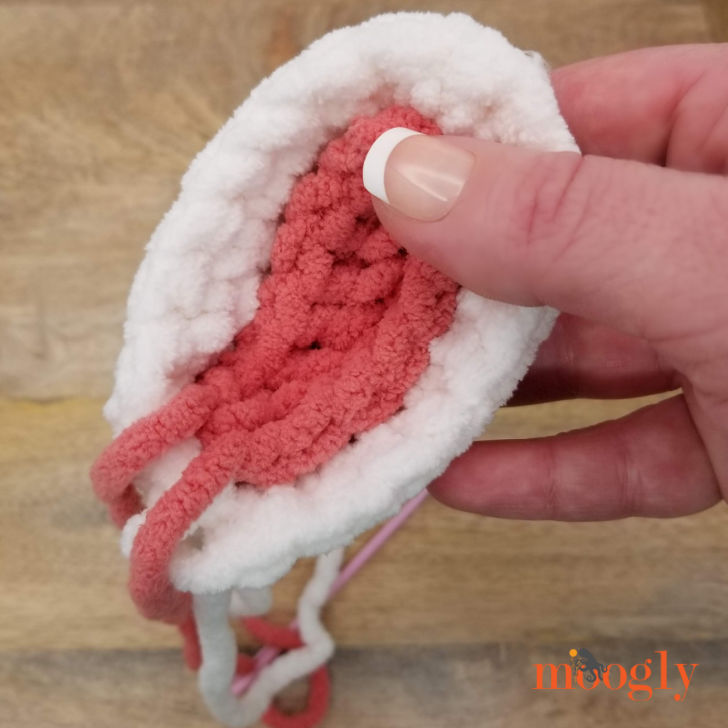 Step 2: Use the long tails of Piece #1 to sew Ears to top of Body, between Rnds 5 and 6 or where desired. 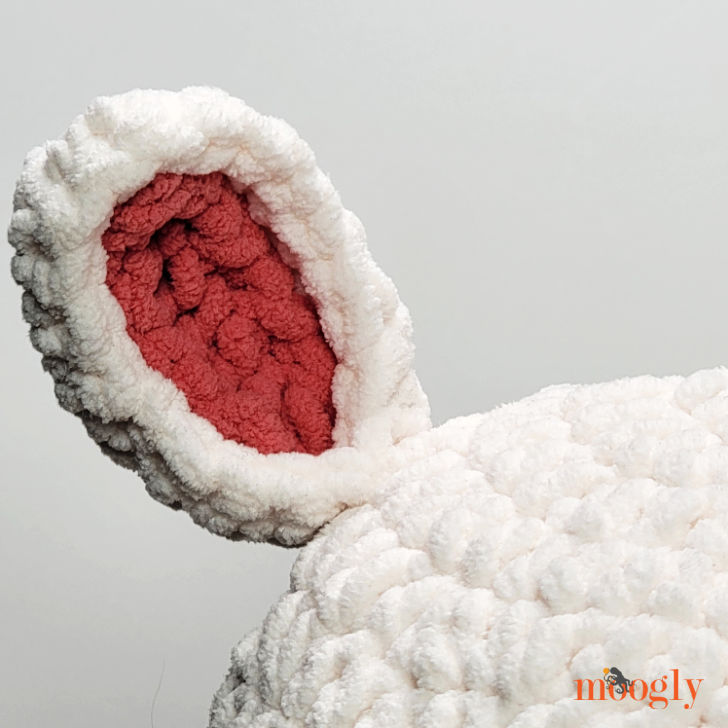 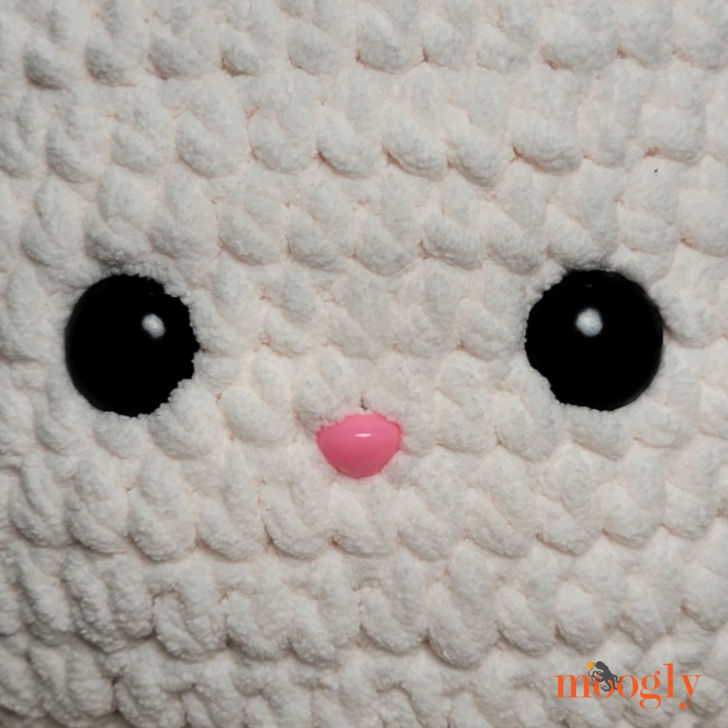 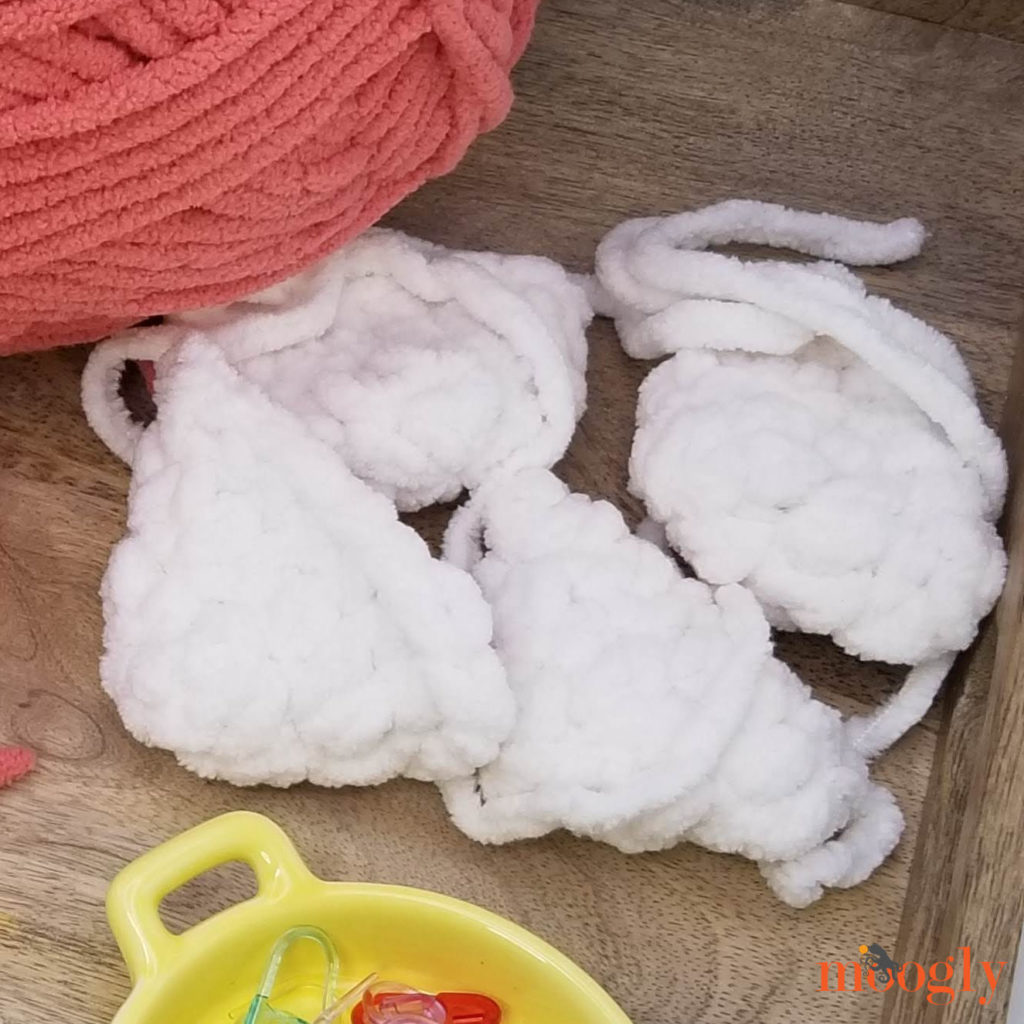 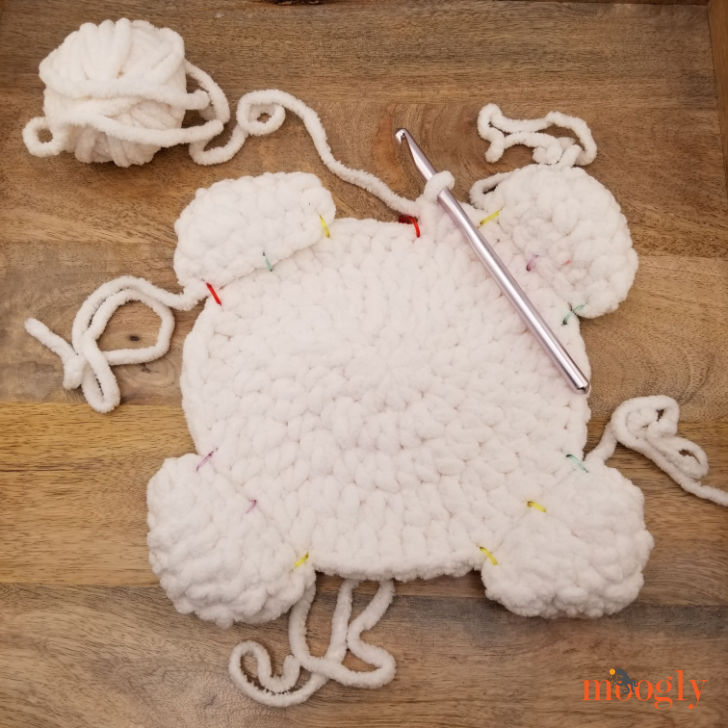 Rnd 7: Sc in next st, sl st in next st, break yarn and seamless join leaving a long tail for sewing. 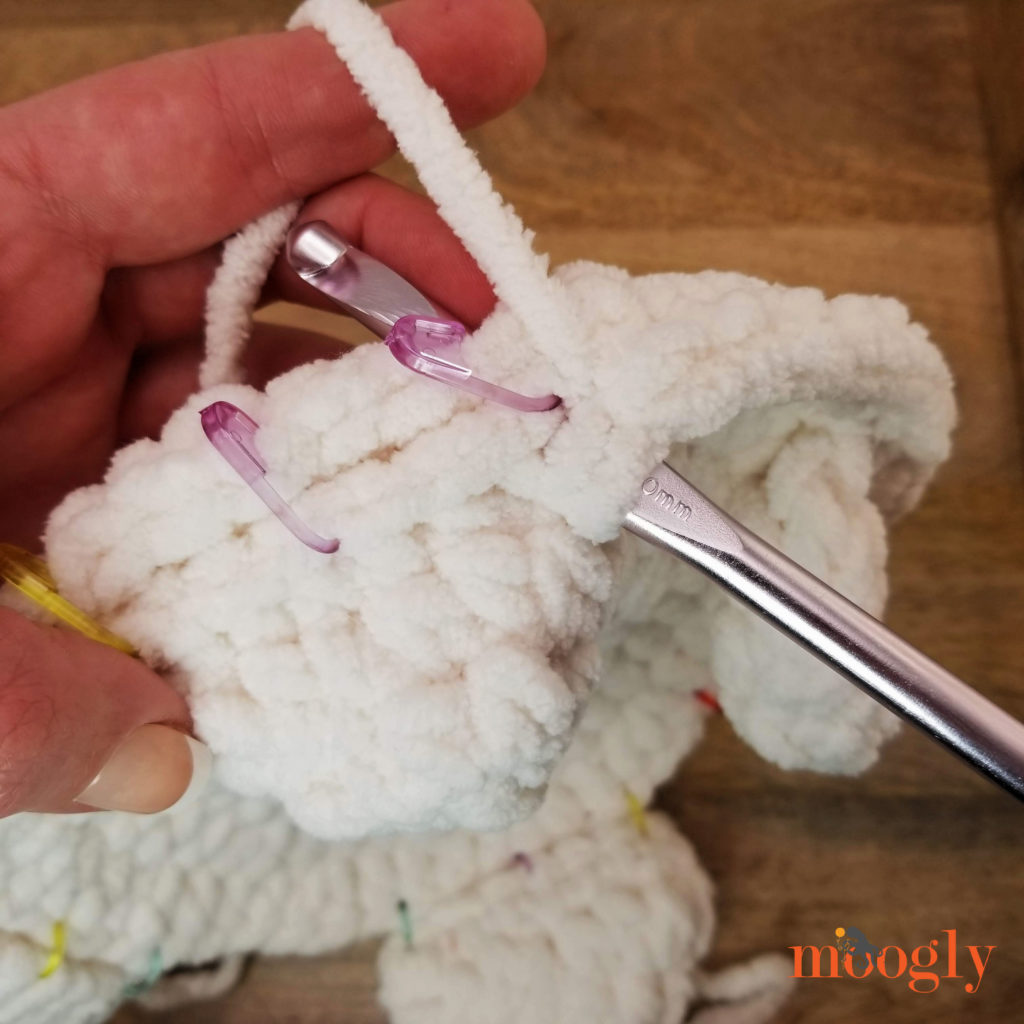 Step 2: Use stitch markers to attach Belly to Body, with long tail at the back. Spin a bit to adjust for foot placement as needed. 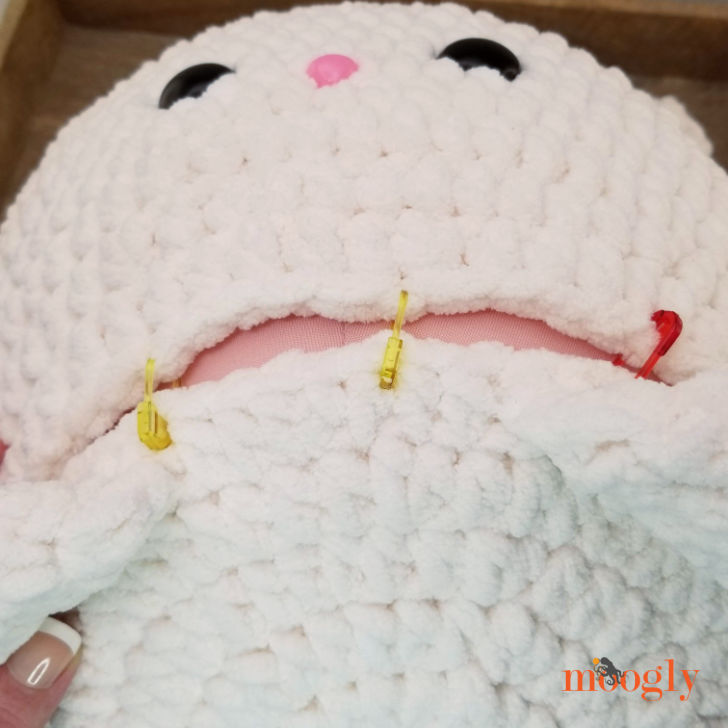 If the Bunny Squish pattern inspires you to make your own project, and you post a photo on social media, be sure to tag me @mooglyblog or #mooglyblog so I can check it out too!

To print or download, use the Print Friendly button below, or go to PrintFriendly.com, or right-click to copy and paste it into a word processing document if those options do not work for you (please note that Print Friendly is a free outside website that the button links to, and you can click here for a tutorial on how to use it, but I cannot provide additional technical support for this service).

If you wish to make items for sale from this pattern or translate it to another language, please visit the About page for details.