The half double crochet stitch is one of my favorites. Often overlooked, and in my opinion underutilized, the hdc stitch has some great properties. It creates a more solid fabric, without leaving as much open “lacy” space as taller stitches, but it’s got much more drape and flexibility than single crochet. Even if you’ve never heard of it before, you can learn this simple stitch in seconds.

How to Crochet the Half Double Crochet Stitch: Right Handed Version:

How to Crochet the Half Double Crochet Stitch: Left Handed Version:

Written Instructions for the Half Double Crochet Stitch

Easy as can be, right? In less than 2 minutes you’ve just learned a stitch and how many chains to make to start a row of them. I hope you enjoyed learning about this fun stitch! There are lots of patterns that use the hdc stitch here at moogly, including:

… and more! Thanks for watching! Is there a stitch you’d like me to demonstrate that you haven’t seen here on moogly? Let me know in the comments! 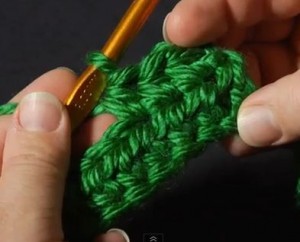 Be sure to check out and like the moogly Facebook page to get the latest updates, links, sneak peeks, and to show off the things you’ve made with Moogly patterns! Moogly is also on Pinterest, Twitter, and Tumblr – come join the fun! You can contact me at [email protected]