Subscribe to the Moogly Newsletter!
You are here: Home / Video Tutorials / Techniques and Tips / Standing Double Crochet: Join Without the Sl St and Ch!

The Standing Double Crochet stitch is one I came to late – and I wish I’d known about it years earlier! It’s not a stitch that you’ll usually find specified in a pattern, and as such it has no standard abbreviation. What it is, is a technique – one that will allow you to start a new row on a crochet project without having to use the telltale “join with a slip stitch and chain 3” – and I can’t wait to share it with you! 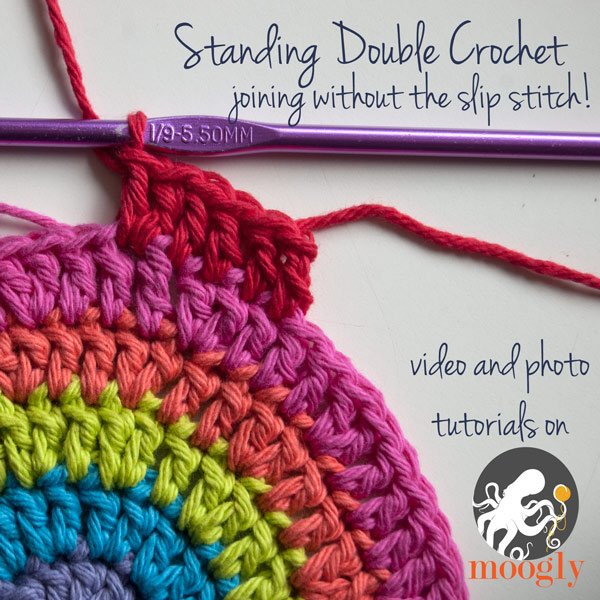 So what do you think? Next time you see a pattern that calls for joining with a slip stitch and then chaining to start off a row or round of double crochet stitches, give the Standing Double Crochet a try! You might just never look back!

NOTE: Several different people have now written to me, claiming that they invented this technique. I don’t know who did, I didn’t invent it myself, and many crocheters have told me they learned it from their grandmothers. Was it lost in time and then rediscovered? I don’t know, and again, I don’t claim to have invented it, I’m just sharing it, and I hope you like it.