Subscribe to the Moogly Newsletter!
You are here: Home / Video Tutorials / Techniques and Tips / Standing Half Double Crochet

The Standing Double Crochet tutorial is popular for showing how to join a new color to a project without having to slip stitch and chain – very cool! And it’s easy enough to extrapolate it to taller stitches – just wrap the yarn an extra time (or two, or three) at the start. But using this the technique to start a row of half double crochets also works – with one extra step to make it just right. This is how it’s done. 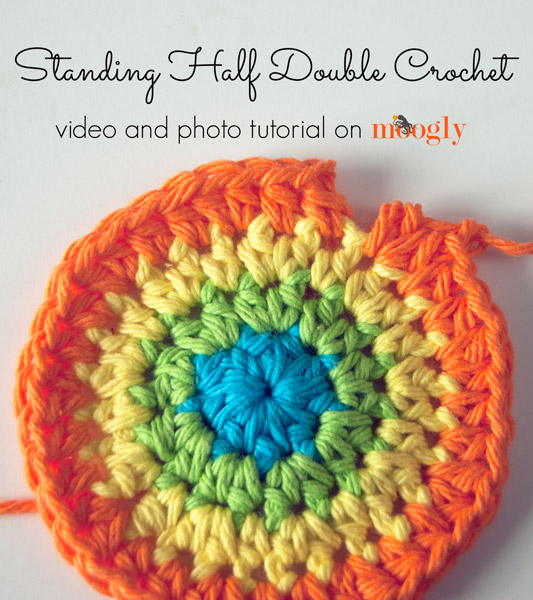 This tutorial was filmed and photographed using a worsted weight kitchen cotton and an I hook – but the technique will work with any yarn and hook, over any number of stitches, in both rounds and rows.

Step 1: Wrap the yarn around the hook 3 times, holding the tail end in your hand with your ring and pinky fingers. You’ll only use the first two wraps to make the stitch, the third is just to help you hold it in place as you work. You could skip it, but it makes it a bit fiddlier to try to work the stitch. 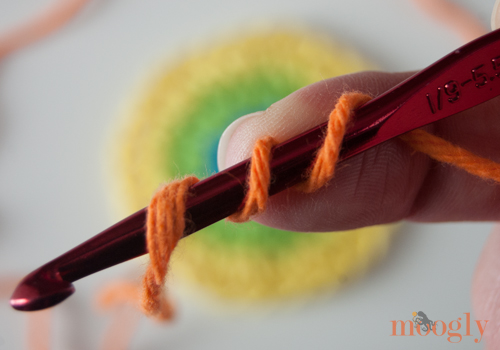 Step 2: Insert the hook into the first stitch you want to work into. Pull the working end behind the piece you’re working into. 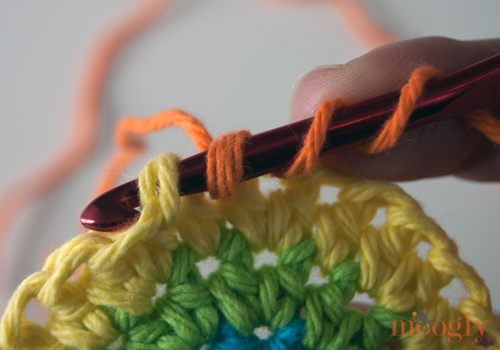 Step 3: Yarn over and pull up a loop. You’ll now have 4 loops on the hook. 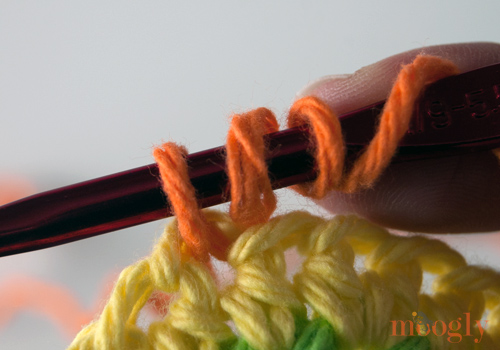 Step 4: Yarn over again and pull through the first 3 loops on the hook. The 3rd you may need to pull over the end of the hook with your other hand. Leave that last wrap on the hook – the Standing HDC is done, but don’t let go of the tail just yet! 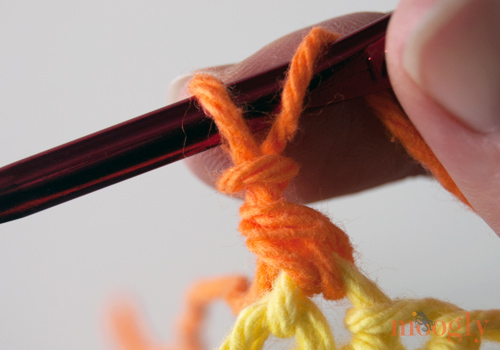 Step 5: Make your next couple of regular hdc sts according to the pattern. Then you can let go of the tail – it’s not going anywhere for now. 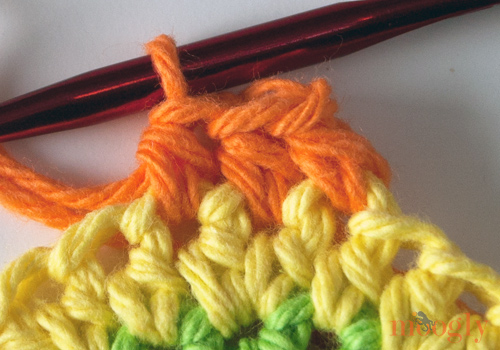 Step 6: Finish your row or round. Now take a look at the top of your row, where you see the little Vs. The top of the Standing HDC is just one loop – not a V like the other stitches. 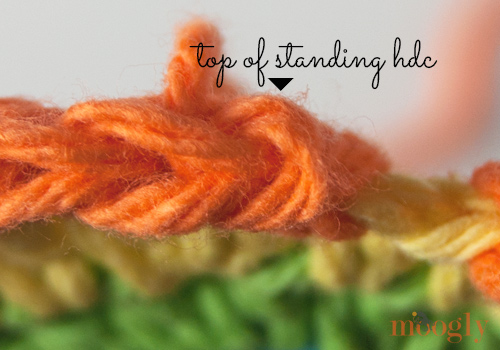 Step 7:  IF YOU ARE WORKING IN ROUNDS then this is not a problem! Use the seamless join to join to the first “regular” hdc (the second stitch of the round) – the V made with the seamless join will become the V you work into on the next round. 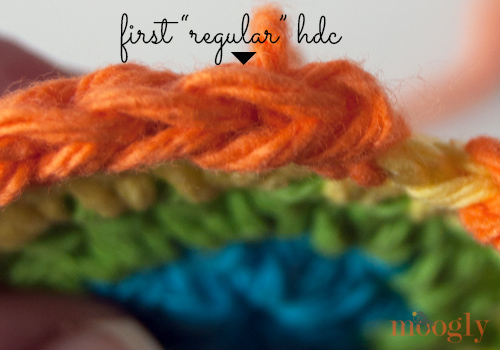 Step 8: IF YOU ARE WORKING IN ROWS then odds are you’re going to want to work into the top of that Standing HDC. So there’s one more thing you need to do. Thread the original tail, the one you were holding to start the Standing HDC, onto a tapestry or yarn needle. 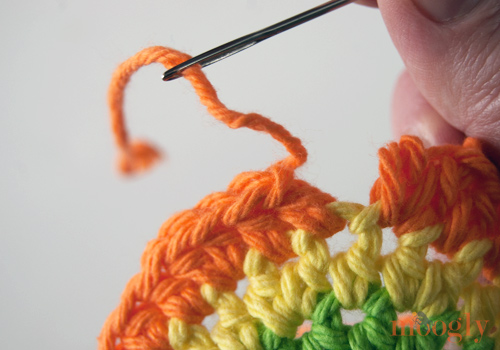 Step 9: Insert the needle into the center of the loop at the top of the Standing HDC. 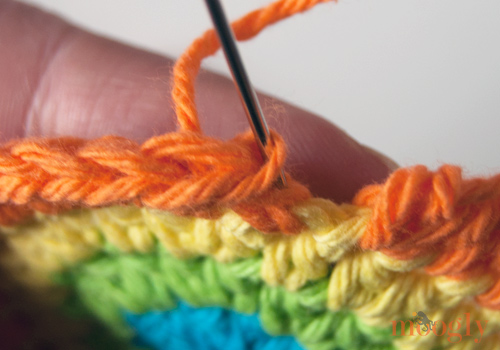 Step 10: Flipping your work over, continue the downward path of the needle and go through the bottom of the stitch, as to weave it in. This holds it in place. Don’t weave it in all the way just yet though – you want just a little bit of play in the stitch to get the hook through. 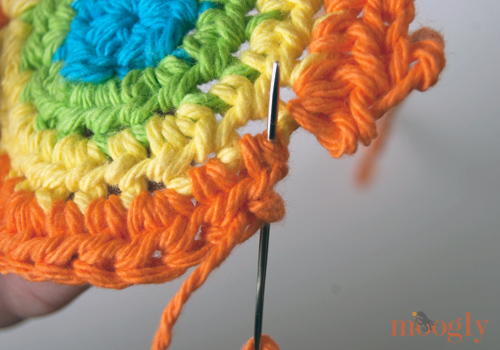 Step 12: Now insert your hook under both loops of the V, and crochet on! 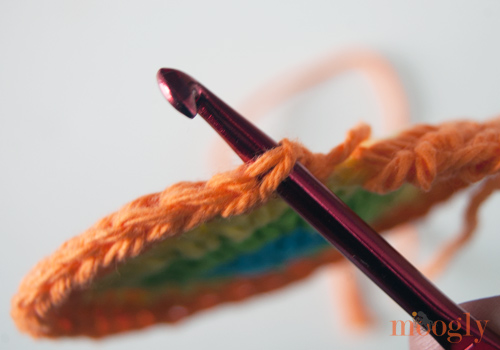 Lots of photos, but not too tricky! The Standing HDC can take a couple of tries to get used to, but it gives you that truly seamless look – no chains or joins. I hope you’ve enjoyed this tutorial – and if there’s something else you’d like to see, just let me know!