Subscribe to the Moogly Newsletter!
You are here: Home / Video Tutorials / Basic Stitches / Learn How to Crochet Right-Handed: A Beginner’s Course!

Odds are, if you follow Moogly, you already know how to crochet. But every so often I get an email or message asking me where a newbie can go to learn how to crochet, starting with the basics. While learning in person is great, not everyone has access to a class or crochet buddy. And books with their 2D drawings can be hard to follow if you don’t already know how to get started! So today I’ve done something about that! 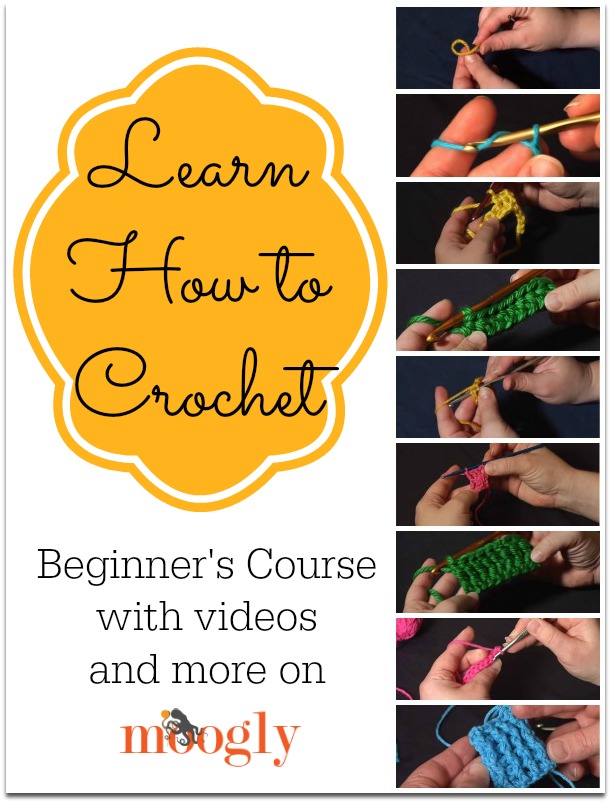 Below you’ll find several Moogly video tutorials, with short descriptions for each. I’ve put them in the same order I’d go in if I were there in person, teaching you how to crochet myself! These are some of the first videos I ever made – I was just a baby blogger! But the info is still good today!

I’d recommend starting with  a DK, worsted, or aran weight yarn (yarn symbol 3 or 4) in a light color. Then you’ll want a US-H 5.0 mm hook or US-I 5.5 mm hook. Go through the videos in this order, one at a time. And take some time to practice each! By the time you get to the end, you’ll be ready to tackle any crochet challenge, with the same patience and dedication. Let’s begin!

The slip knot is how you’ll begin the majority of your yarny projects. True confession – I was late to the slip knot myself! For the first year I crocheted, I would tie a regular double knot loosely around my hook and just get started that way. The slip knot is adjustable, and an all around better choice, but if it’s tripping you up too much, just tie a knot and move on to chaining. More on Slip Knots here.

Chaining is the most basic skill in crochet. And it still takes time to master! You’ll likely make hundreds of feet of chains before you gain the skills to always have truly consistent chains. This is where you’ll learn how it’s most comfortable for you to hold the yarn and hook as you work, and how to keep your tension consistent. And don’t make them too tight – you’ll need to get your hook back in there later! If you’re really itching to make your first project, you can make a really really long chain and loop it around multiple times for a bracelet or necklace – or use it as ribbon to tie up a pretty present! More on Chaining here.

Single crochets are the foundation of all the stitches, and the first real stitch most people learn – with these you can work into that starting chain and start making actual crocheted fabric! Scarves, purses, blankets – all become possible with this stitch! Pay special attention in this video to how to get to the next row. And always count your stitches after each row – this is an important habit to get into, and will save you lots of time down the road, telling you right away if you’re accidentally adding or subtracting stitches somewhere. And you can do fun stitch patterns with it, like the Grit Stitch and Granite Stitch! More on Single Crochet here.

In UK patterns, this is called a double crochet, and abbreviated “dc”.

The slip stitch isn’t used much all by itself – though there are some designers trying to change that! But it is used a lot, and while you can make many flat patterns without slip stitching, you’ll need it eventually. And if you’ve mastered the single crochet above, this one will be a breeze! More on Slip Stitches here.

Half Double Crochet – abbreviated in patterns as hdc

The next step is the half double crochet. I’ve put them in height order here. You may have noticed that the single crochet is a short, squat stitch that typically makes dense, somewhat stiff fabric. The half double crochet gets us a bit more height and flexibility in the fabric, while maintaining most of the solidity that keeps it from being too see-through. It’s a lot like the single crochet, with just one extra step right at the beginning. More on Half Double Crochet here.

In UK patterns, this is called the half treble, and is abbreviated “htr”.

The double crochet is nearly as popular as the sc, if not more so! It’s got great height without being too “leggy” and it might just make you feel like you’re waving a magic wand! The fabric made with double crochets is perfect for blankets, scarves, hats, and other wearables – much softer than sc or hdc fabric, if a little more “holey.” And combined with sc stitches you can start with some great textures, such as the Griddle Stitch! More on Double Crochet here.

In UK patterns this is called the treble, and is abbreviated “tr”.

Treble Crochet – abbreviated in patterns as “tr” or “trc”

This a stitch you won’t see as much as the others, but it does pop up in lacier items, as well as the corners of many afghan squares! It’s a simple extension of the double crochet – and because it’s so very tall, it gets you where you’re going fast! Two patterns that use treble crochet exclusively are here on Moogly – the Big Bold Chevron Afghan and Curtains! Get this one down, and there’s no stopping you – all the taller stitches are just one more yarn over (and then one more, and then one more…). More on Treble Crochet here.

In UK patterns this is called the double treble, and is abbreviated “dtr”.

Front and Back Loop Only – abbreviated as “flo” and “blo”

Now all this time we’ve been working under both of those top loops when making stitches, and if the directions don’t mention it, then that’s the way to go! But you can get some very neat effects with the stitches you have already learned, by going under just one of the loops! Working in the back loop only on every row creates a ribbed effect, while working in the front loop only on every row creates a thinner, drapier fabric. Or you can alternate between them within the row for even more interest! More on FLO and BLO here.

Post Stitches – abbreviated with the prefix “fp” and “bp”

If you’ve gotten this far, you’ve got all the basics down. I’ve included post stitches here as a little taste of how you can really start taking what you’ve learned in new and exciting directions! Up until  now, you’ve been working into previous rows via those two top loops – either one or both. But with post stitches you leave those loops behind, and stick your hook new and exciting places (hey now!!). Take a peek at post stitches here, and if it’s too intimidating, you can come back to them later – I know you can conquer them eventually. But as you can see, the possibilities are nearly endless! More on Post Stitches here.

So how did it go? Did you make it all the way through? If you’ve gotten all of these techniques down, then I know you can make any stitch you set your mind to! You’ll find lots more crochet stitches and handy techniques to explore on the Video Tutorials Page here on Moogly (always available via the top menu!), and below I’ve linked the next few I think you should watch next, to increase your skills even more! Happy crocheting, and welcome to your new addiction. 😉

Thank you so much for reading and watching! Get Moogly on your favorite social media sites: Facebook, Twitter, Pinterest and TikTok, and sign up for the Newsletter so you don’t miss a thing! All photos and text copyright Tamara Kelly 2014.

Previous Post: « Crochet Health Survey: How Has Crochet Helped You?
Next Post: Moogly is Now on Zazzle! »