The Slip Knot is the start of almost every crochet project, the only exception being the magic circle. It’s how we make that very first loop that goes on the hook. Most people think of chaining as the first step, but truly, the slip knot is where it all begins. Here’s how it’s done:

How to Crochet the Slip Knot: Right Handed Version

How to Crochet the Slip Knot: Left Handed Version


The slip knot is adjustable, easy to pull out when you’ve made a mistake, and a great thing to know. Showing how to make a slip knot is harder than it looks though – when I actually make them for myself I do it “inside” my hand, where even I can’t see it. I had to really practice and think about it to bring it “outside!”

Before I learned how to make a slip knot (and WAY before I learned about the magic circle), I spent the first couple of years making tiny double knotted loops around the hook and just hoping for the best. Ahhh, the olden days before youtube! Luckily I happened across a book that explained it somewhere in there and my crochet projects got way faster and better after that. So I do know from experience that you can crochet without the slip knot… but I also know from experience that once you have it down, the slip knot is the best way; now it’s second nature.

What video tutorials would you like to see on moogly? Are there any questions, techniques, stitches, or ideas in crochet that have you flummoxed? There are no bad questions – every time someone asks, someone else is grateful because they were wondering the same thing! Let me know what you want to know in the comments! 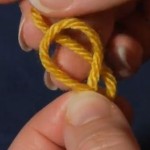