Herringbone Double Crochet is another simple stitch that’s fast to learn and expands your options. Like other herringbone stitches, the HBdc has a slight lean, so that rows worked back and forth create a herringbone look. You don’t see it in patterns very often, and it’s not very well known, but hopefully that will change with time! Even if you’re just making a simple scarf, it’s a great way to add texture and interest. Here’s how it’s done. 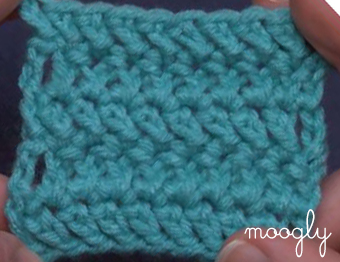 Video Tutorial: How to Crochet the Herringbone Double Crochet Stitch

Start with a chain that equals the number of stitches you wish to make, plus two. The first three chains are skipped, and they count as the first stitch of the row. When starting a new row, ch 3 and count that as the first stitch. Work into the top of the ch 3 from the previous row at the end of each new row to maintain your stitch count.

Pretty straightforward I hope! This variation isn’t much taller than a regular double crochet – which means the Herringbone Double Crochet stitch is easy to use in place of double crochets in any project to give them a whole new look and additional texture. Have you used this stitch before? What did you make? Share with us in the comments! 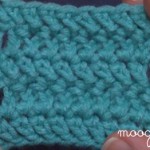 Be sure to check out and like the moogly Facebook page to get the latest updates, links, and sneak peeks. Moogly is also on Pinterest, Twitter, Tumblr, and now Google+  – come join the fun! [email protected]