It’s the end of yet another crochet along here on Moogly! This has certainly been an interesting year in many ways, and I’m so glad all of your chose to CAL with me – and now it’s time to bring MooglyCAL2017 to a close… and get ready for MooglyCAL2018! 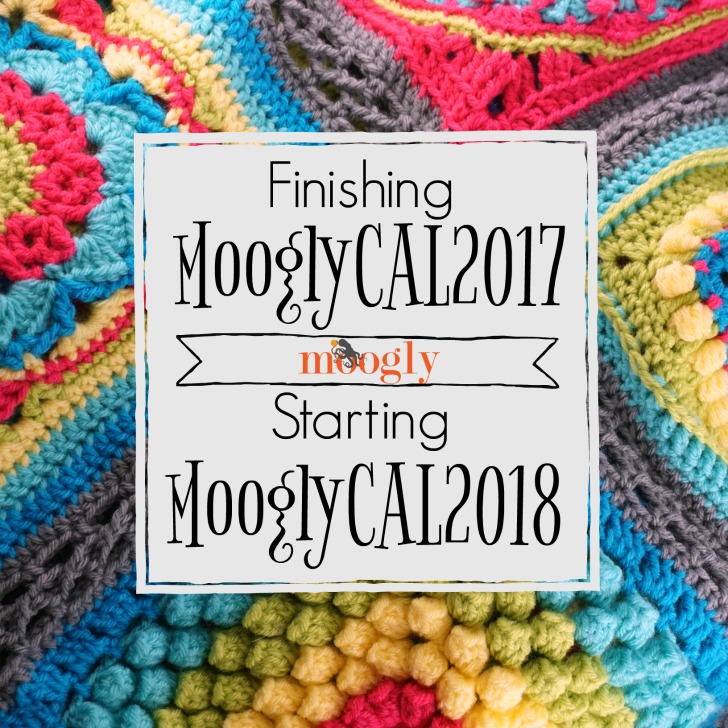 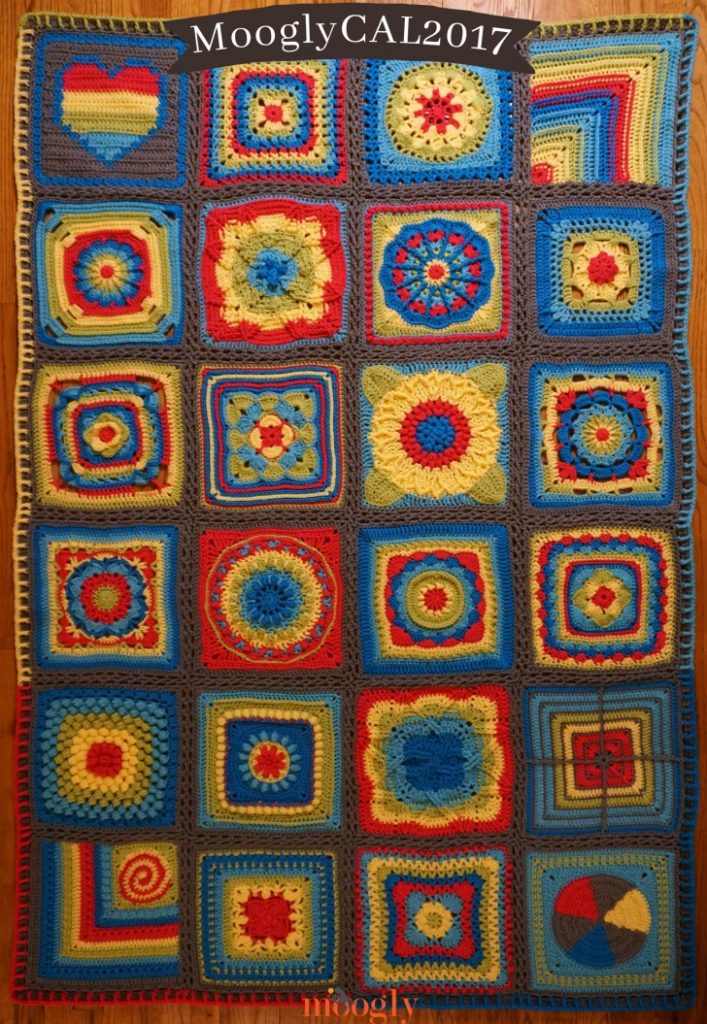 Okay, so full disclosure – there are still some ends on the back that I’ll be weaving in over the holidays. I had ordered extra yarn last year, but found that the previous year’s total still worked – so unless you used a crazy join or border, we’ve got it nailed down at this point! (More on that in the info for 2018 below!)

I created a new border pattern for this year’s blanket as well, using my joining color (Lion Brand Vanna’s Choice in Silver Grey), and the leftover bits of the other colors. CLICK HERE for the pattern for the Windows Border – fresh on Moogly! 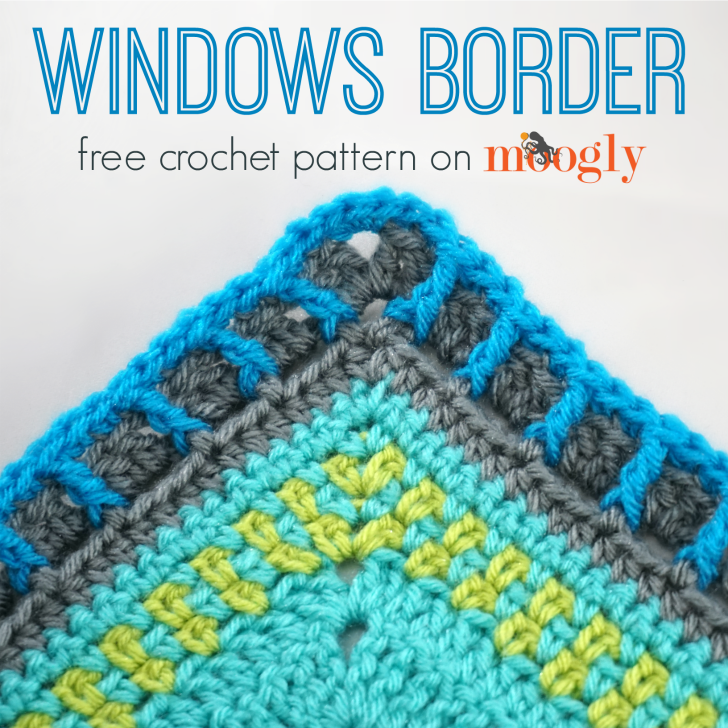 For the joining, I used a modified version of my Tight Braid Join. I worked 12 “sc, ch-3” loops on the side of each square, and a “sc, ch-3, sc” loop in each corner. The number of stitches skipped between each sc varied a bit since all the squares had different stitch final counts, but the “standard” was a skip 2, and I adjusted from there. The following squares were joined on the 2nd chain of each ch-3 loop (see the Tight Braid Join tutorial for more details). 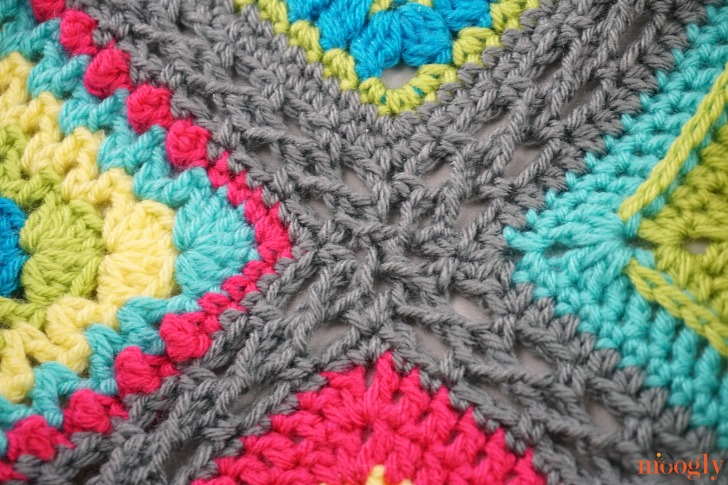 Before we move on to 2018, I want to take a moment to thank all the designers from 2017! They have all worked super hard to bring you original designs all year long – and this Crochet Along could never happen without them! They all have tons of fantastic patterns to check out, so be sure to give them a visit and see what else they have to offer!

Every Trick on the Hook

Let’s give them a round of virtual applause! You can see all the patterns used in the 2017 CAL here on Moogly or on the MooglyCAL2017 Pinterest board.

Now for what you’ve been waiting for – the MooglyCAL2018!

WHAT ARE WE MAKING:
Over the course of 2018, we’ll make twenty-four 12″ crochet squares or blocks together. Then, at the end of the year, you can join them up to make a 4′ x 6′ blanket, or make two 3′ x 4′ baby blankets – or add more squares to make an even bigger afghan! Each block will have its own post here on Moogly, with my version, my notes and helpful hints for that square, and the schedule of blocks with all the previous blocks linked. The actual patterns will be on the designer’s blogs.

WHO IS DESIGNING THEM:
I’ve got a great list of designers again this year – some who have contributed to Moogly CALs before, as well as a few new names to mix it up! I’m so excited to see what they come up with! Each designer will be “revealed” along with their square.

WHAT DO YOU NEED:
The main details for 2018 will be the same as 2017, with the list of supplies shown in the graphic below. I can’t tell you *what* yarn I’m using yet – but I will share it as soon as I can! I’ve listed total yardage here – divide it by the number of colors you want to use, and then divide that by the yardage given for your yarn choice to see how many balls of yarn you will need. 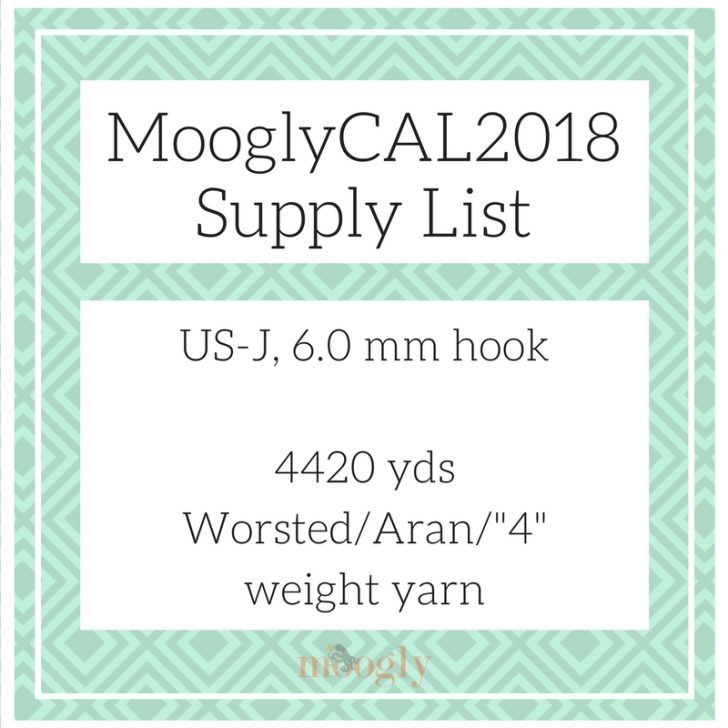 WHEN DOES IT RUN:
The first square of MooglyCAL2018 will debut on Thursday, January 18th, 2018. (I had a type here earlier – my apologies!) For those who made the previous year’s afghans, you might notice that this is a two week later start than previous years – this is for a whole host of reasons, but it also gives a little rest and a chance for the designers to catch their breath over the holidays!

A new square will debut every two weeks, on Thursdays – except for Thanksgiving week, when it will debut on a Wednesday. The last square will debut December 6th, 2018. Then you can join them up and add a border et voila! That’s MooglyCAL2018!

I hope you’ll join us in 2018 – and if you decide to add extra squares, be sure to check out this year’s designs – they are great to mix and match! Thank you all so much, again, for CAL with me!