Subscribe to the Moogly Newsletter!
You are here: Home / 2014 Afghan CAL / The 2015 Moogly Afghan Crochet-Along: Kicking Things Off and Block #1!

Woohoo! It’s time to kick off the 2015 yearlong crochet-along here on Moogly! Every 2 weeks I’ll share a new free 12″ crochet block pattern, and we’ll all make them together. All the patterns will be free all year long, and we’ll get to visit a variety of fantastic crochet blogs along the way!

I want to take this opportunity right away to thank all the fantastic designers who have volunteered to design for the CAL this year! And I also want to thank Elke Wellens who is providing Dutch translations to all the designers so that even more people can join in – she’s even got a Dutch speaking Moogly CAL Facebook group going! Lastly, a big big thank you to allatti2d, Angela2011, HelenJE, and Patricia-R-S, who are moderating the Ravelry group for the 2015 Moogly CAL! You all make this so much fun – click either of those links to check the groups out!

Below is the CAL schedule – I’ll reproduce this schedule in every new block post, and add links as we go along, so you can go straight to past posts from each new post as needed, and see when the next block is scheduled. December is for assembly and finishing! There will be 24 blocks total, and each of the posts will go live here on Moogly at 10am Central time on their specified date.

Introducing Block #1: Tamara’s Kismet Square by Jessie Rayot, of Jessie At Home! CLICK HERE to go to the pattern page – printing instructions in the post. 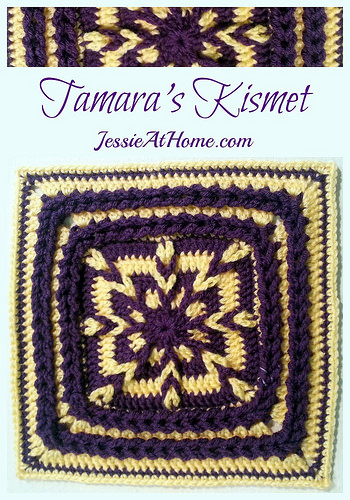 Above is the original, made with 2 colors. This square is so fun looking – like a starburst! And getting to use the Jacob’s Ladder technique is fantastic. The fact that she named it after me has me tickled of course, but even objectively I know this is a fab square.

My yarn finally arrived, and I got the square made and blocked, et voila! 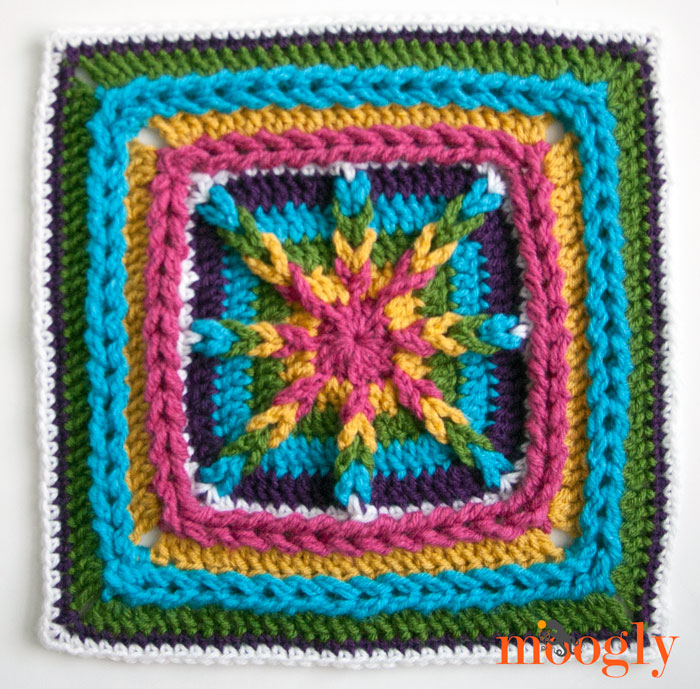