Subscribe to the Moogly Newsletter!
You are here: Home / 2014 Afghan CAL / Make It Work: Getting Afghan Squares to the Size You Need!

The year was 2008, and I was participating in my first crochet-a-long. I wasn’t designing yet – I was still very much in a learn all the things stage, having only discovered a few years prior that crochet was on the internet! And I found a year long afghan block crochet-a-long on Ravelry, and decided to join in and take my skills to the next level. It was a fantastic decision. I learned many techniques and stitches, and one of the things I quickly learned was how to adjust my squares to get them all to the target size! 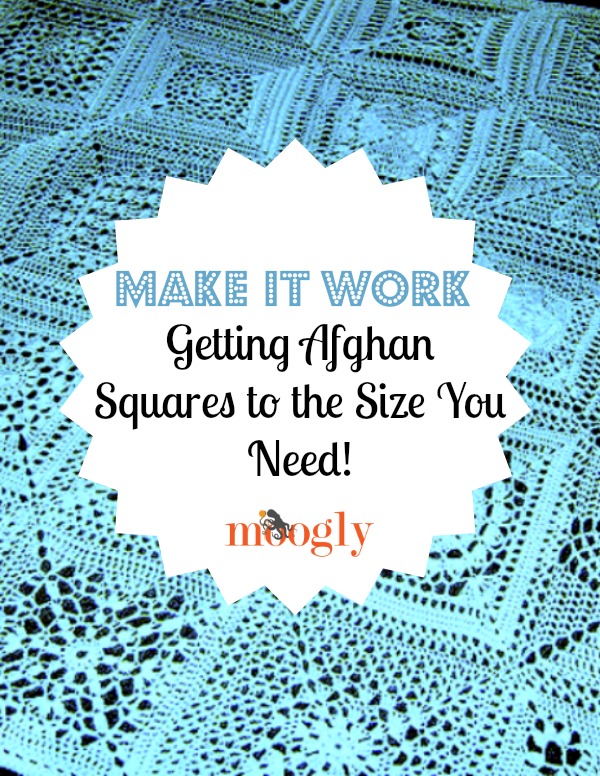 Whenever you make an afghan from blocks or squares, size becomes an important factor. Unless you’re mixing small and large squares on purpose, you’re going to want to get each square as close to the target size as possible.

But when making squares from different designers, that isn’t always as easy as it might seem. Two designers might have both written patterns for 12″ squares – but they might have very different tension levels. And when the same person makes both, they end up with one square that’s 13″ wide, and another that’s only 10.5″. Luckily, this is easy to fix – without frogging the whole square! Just make sure never to cut your yarn before you measure! 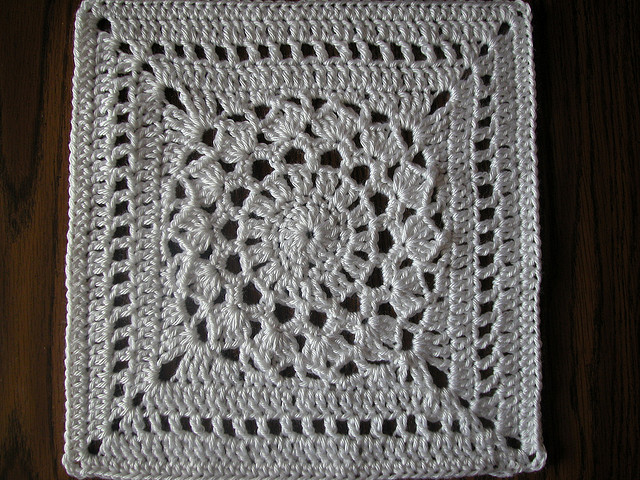 Above you see the square I made several years ago, using the pattern Flower Burst Square by Chris Simon. When I made this square according to the written directions, I came up an inch short – only 11″ wide. But rather than frog the whole square and redo it with a larger hook, I just added an extra round of half double crochet stitches – and got to 12″ exactly!

In my experience, a round of double crochet will get you over an inch of extra width, half double crochet about an inch, and single crochet a bit less than that. But that’s my tension – you’ll want to take your own measurements. So if you get to the end of a square, and need an extra row (or two!), try a few stitches and then take out the ruler. Measure the height of that last row, and then double it. Add that to your current width, and continue or adjust the stitches as needed!

But what if the square is too large? Then in that case, yes, you’re probably going to want to undo, or frog, some of the stitches. But not the whole thing! If the last row is primarily double crochets, then pull that row out and sub in half double crochets, or single crochets. Or leave it off all together if needed! 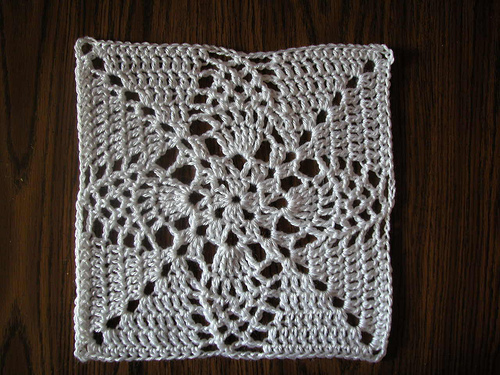 Personally, I like to measure as I go. For instance, the above picture is my version of the Pineapple Granny by Priscilla Hewitt. As I approached the end, I found that I was very nearly at 12″ already, and wouldn’t have room for the last row of double crochet. So I did it in half double crochet instead, and it worked out fine!

So with this post I want to encourage all of you participating in the 2014 Moogly Afghan Crochet-a-Long (as well as all of you who aren’t!) to not fret if your squares don’t all turn out at exactly 12″ as written. Over the course of the year we’ll be making patterns from many different designers, and while I’ve focused on 12″ squares all made with the same weight yarn and hook size, it’s pretty much guaranteed that some will measure up for some better than others.

And that’s okay! Adding or subtracting, or substituting rows at the end of the square is all part of making a mixed squares afghan. It’s okay if yours is a little different than the next person’s – crochet is an art, and everyone’s art is unique!