Subscribe to the Moogly Newsletter!
You are here: Home / 2014 Afghan CAL / Announcing the 2015 Moogly Afghan Crochet-Along!

The Moogly Afghan Crochet-a-long for 2014 was a huge success, and I’ve loved seeing everyone’s projects all year! But the one question everyone has been asking for the past month…. what’s the plan for 2015? Well, I’ll tell you! 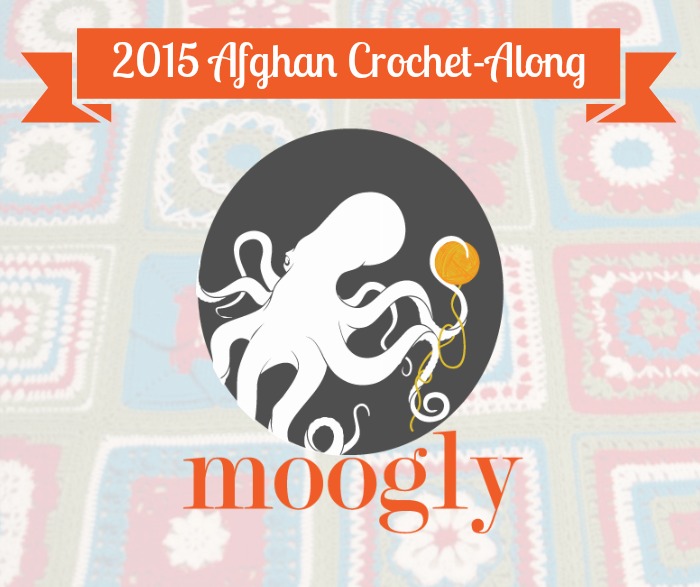 I learned a lot in 2014, as it was my first time leading a CAL! And I set up a survey towards the ends, to see how you all felt about the experience, and what you hoped to see this next year. The responses were very enlightening!

The vast majority would like to repeat last year’s CAL – with new blocks of course! So that’s what we’re going to do. In 2015, I’ll share a new 12″ block every 2 weeks – and you can CAL it with the rest of us, or if you don’t like it, select your own substitution. At the end, you can seam and edge them however you like. And you’ll have a 4′ x 6′ (or bigger!) afghan to show off!

Now, one big problem we had in 2014 was patterns that were free… becoming paid. The other problem was blogs going offline, and taking their patterns into the ether! Well, I’ve come up with a solution for both that I’m very excited about!

For the 2015 Moogly Afghan CAL, I’ve recruited 24 of my favorite fellow crochet bloggers. They’ll each design a 12″ block for the CAL – and it will always be free on their blogs! You’ll get to visit new and beloved designers and we won’t have to worry about any limited time offers. Some have already gotten started, and I know you’re going to love what they come up with!

Once again we’ll be using worsted/aran weight yarn, and a US – I, 5.5mm hook. Beyond that, each designer has been given free rein to design something fun and exciting, in as many colors as they see fit!

I plan on using Lion Brand Vanna’s Choice – though I’m still deciding on a color palette. Based on last year’s CAL, I’ll plan on purchasing 24-28 skeins, though I know with the Vanna’s Choice that dye lot won’t really be an issue. If you cannot purchase all your skeins at once, I’d recommend picking a non dye lot yarn, or one where the dye lots don’t seem to matter. However, if you’re using multiple colors and mixing up the order of the blocks while joining, the dye lot really won’t matter at all – all things to consider!

Also exciting – there’s a new Ravelry group for the 2015 CAL! CLICK HERE to check it out and join up! It’s a great place to show off your finished blocks, and get help with tricky ones too. The moderators are volunteers, and work very hard to keep things running smoothly, so please give them some thanks – they’re a HUGE help!

If you’re still finishing up the 2014 CAL, don’t worry – my posts aren’t going anywhere, and I’ll keep the link in the drop down menu at the top of the page so you can find them throughout 2015. However, I do recommend printing or downloading the rest of the patterns asap – many will become paid or may disappear, and I cannot provide them to you! If you need help with one, check out the appropriate thread in the Ravelry 2014 CAL group!

So, I hope you’ll join us in 2015! I can’t wait to see what this year has in store – after all, the blocks themselves will be a surprise to me too, this time around! The first block for the 2015 CAL will be shared on January 8th!

Get Moogly on your favorite social media sites: Facebook, Twitter, G+, Pinterest,Instagram and Tumblr, and sign up for the Newsletter so you don’t miss a thing!