Subscribe to the Moogly Newsletter!
You are here: Home / Video Tutorials / Techniques and Tips / Working Into the Other Side of the Foundation Chain

Naming this tutorial was incredibly difficult! Because it’s about a technique or line of instruction that can be phrased many different ways. “Worked in two halves.” “Join to foundation chain.” “Break yarn and rejoin at chain.” “Repeat pattern in other side of foundation chain.” What does it all mean? Let me explain in this video tutorial! 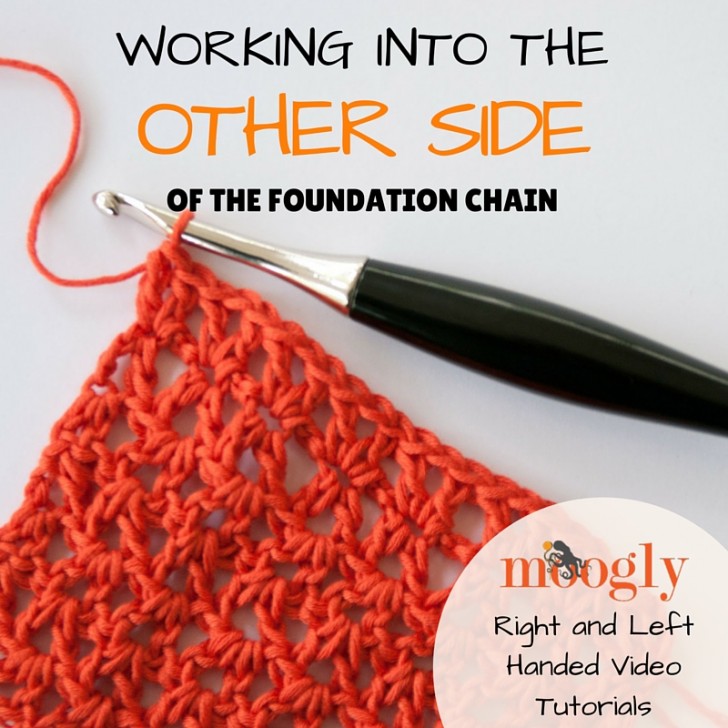 Working into the Other Side of the Foundation Chain (Right Handed)

Working into the Other Side of the Foundation Chain (Left Handed)

As Seen in this Video (Click for more information!)

So these instructions show up most often when you’re making something like a rectangular wrap or shawl – times when you want symmetry in the stitch pattern, but aren’t working in circles or half circles. Working into the other side of the foundation chain can also come up in garment patterns, for instance when the foundation chain is at the shoulder.

Generally speaking, you’ll follow a pattern in rows to about the halfway point (possibly excluding some sort of edging or trim), and then the instructions will tell you to stop and work the pattern again from the other side of the foundation chain. Some patterns really lay out exactly what they mean, while others leave it sort of vague – and if you’ve never encountered this before, it can be pretty confusing – I know, I’ve gotten the emails asking about it!

So to lay it out here for those unable to watch the video:

To make the second half of the pattern, you turn the first half around so that the chain you made at the very beginning – the one that Row 1 was worked into – is facing up. If the pattern calls for a right side (RS) or wrong side (WS), then you need to make sure the side of the fabric indicated in the pattern is facing you.

Then, look for the loops from the foundation chain that are now facing up. It might be one loop, it might be two, depending on how you worked your first row. You are going to use those loops to work into for your new Row 1 for the second half!

So join your yarn to the unused loops from the first chain, and crochet according to the pattern directions! Most often, this will “mirror” Row 1 of the first half, which can make it even easier to see where to work each stitch. But as always, read your pattern carefully – each one is different (and that’s what makes it fun!).

I hope this has helped answer any questions you have had about this technique. However the pattern writer phrases it, it’s a great way to make sure your garment’s stitch pattern looks symmetrical on both sides. It can also lend a little bit of stability to projects without having to use seaming, as the chain has less stretch than the rest of the stitches. If you have further questions about this technique, please let me know in the comments!

Get Moogly on your favorite social media sites: Facebook, Twitter, G+, Pinterest, Instagram and Tumblr, and sign up for the free Newsletter so you don’t miss a thing! Thank you to Lion Brand yarn and Furls Fiberarts for products used in this tutorial.