Subscribe to the Moogly Newsletter!
You are here: Home / Current Events / My Adventures at TNNA Columbus, 2015!

I spent the last weekend in May (and the first day of June) at The National NeedleArts Association Conference in Columbus, Ohio. TNNA does two conferences a year, but this was the first one I ever attended. And I have so many pictures to share!

I had a sneaking suspicion I’d have more to bring home than I left with, so rather than flying I drove – or rather, I talked my brother into driving me! The trip from Bettendorf, Iowa to Columbus, Ohio took about 8 hours, and we got in some serious sibling time. And I spotted some fun stuff along the way… including tomato plants growing next to the pumps at a gas station!

We arrived a bit later than I had planned – mostly because we had forgotten to account for the time change! But it was all good, and I was able to get checked into the hotel and back out in time for the fashion show. I tried to take photos, but those models don’t stand still enough for my cell phone. But I did get one decent picture of the Féileacán Shawl by Jennifer Ryan. I tried desperately to get a decent shot of a new shawl from Andee Graves, but I fear I’m not meant to be a catwalk photographer. The pattern isn’t out yet, but you can bet I’ll share it when it is! Andee was wearing her Eleonora Shawlette though, which is available – and caused many excited comments from yarn companies who were surprised at what crochet can do! 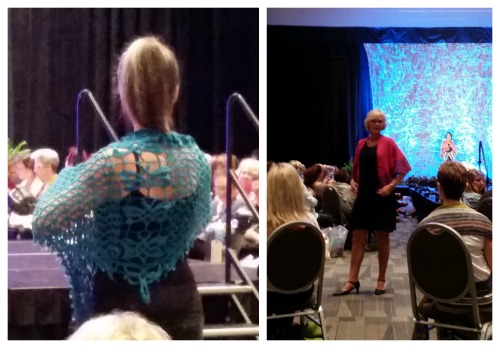 After the fashion show it was time to head on over to the Marly Bird Designer Dinner. It was so much fun I forgot to take photos! I got to see so many wonderful friends from all over the country. You can get a peek at some great pics on From Grammy’s Heart! She was way better at taking pics than I was! Here’s me, Andee Graves, and Jessie Rayot! 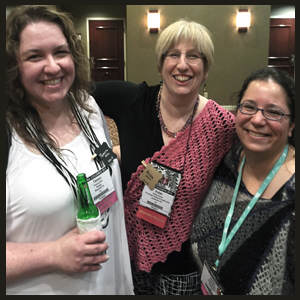 Photo courtesy of From Grammy’s Heart

What I did get a photo of was the yummy yarn! Check out my door prize, courtesy of Knit Circus! Try not to drool! 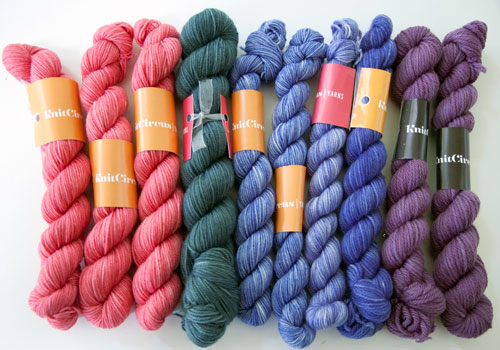 And I also won these two fab skeins of Classic Elite yarns during a table game! 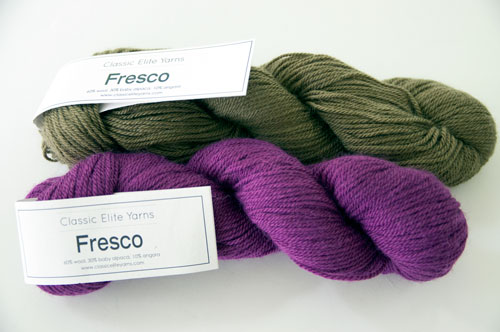 And when dinner was over, we each got an amazing goodie bag – I couldn’t quite get it all in the photo! 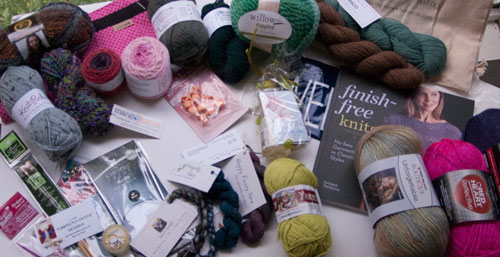 Saturday was walking the floor – and walking and walking and walking. I wore my Sanuks – recommended to me at last year’s Knit and Crochet Show – and so did Jessie At Home! We were foot twins! There were so many vendors, and the conference floor was packed with retailers deciding what to order for for their stores. So mostly I ogled and observed – and caught up with friends, and made new ones.

I also got to see a demonstration of Sprang weaving with Carol James! Here’s her youtube video – this is an amazing art, and I was blown away! She also has a book: Sprang Unsprung!

And I received this lovely cowl from Grammy’s Creations – and yes, the pattern is available! Thank you so much Becky – it’s even more beautiful in person! 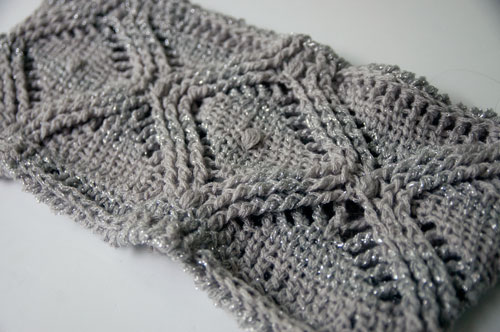 That evening was the Craftsy Instructor Dinner! It was great to meet my fellow instructors, and chat about our experiences! And they had a nice gift for all of us too! 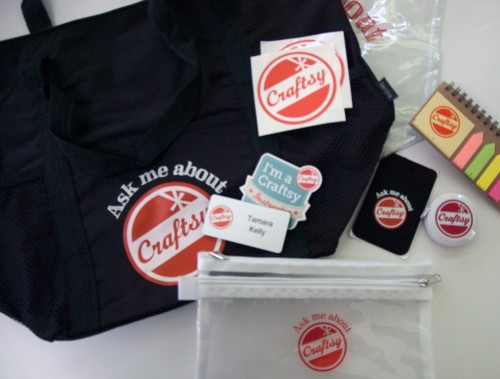 Sunday started with a brunch with Willow Yarns – I wasn’t familiar with their selection before, but it’s lovely! I can’t wait to work with it!

After that, Sunday was more visiting, chatting, meetings, and walking the conference floor. At the end of the day, I’d still only made it halfway through the booths! I knew I was going to have to pick up the pace a bit, as the whole thing closes down on Monday at 2pm. I did also attend a couple of Yarn Group events, which were quite interesting!

Monday was run run run, but I managed to get through all the aisles in time, and even finish the Yarn Quest! This year the Yarn Group sponsored a quest, where you could collect samples and freebies from different companies. It was a great way to experience new yarns and products, and meet new people! Check out some of the amazing things I brought home from my quest! 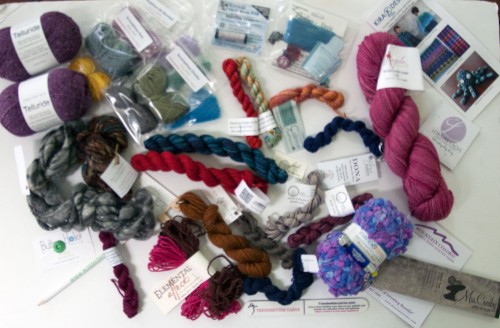 This isn’t even half of it! This one I can’t wait to try – Suri yarn, from the North American Suri Company! The owner is originally from Iowa and it was her first show too. Suri comes from alpaca, but it’s from a different part of the coat and reacts differently. I learned a lot! 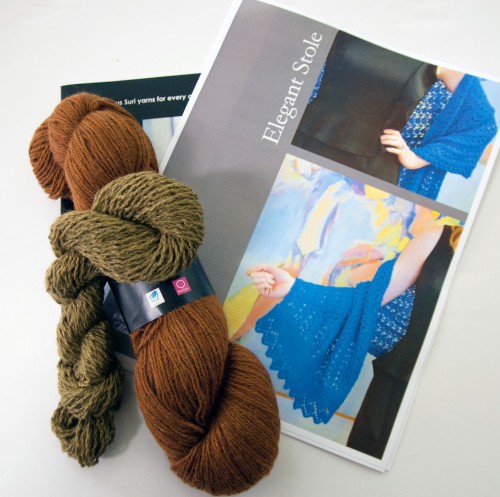 There’s so much more to show and share…. and so many giveaways in store!! Here’s a sneak peek at some of the items I’ll be giving away over the next few months! And did I mention I got an extra bag from the Marly Bird Designer Dinner to give away too? So stay tuned – that one starts SOON! 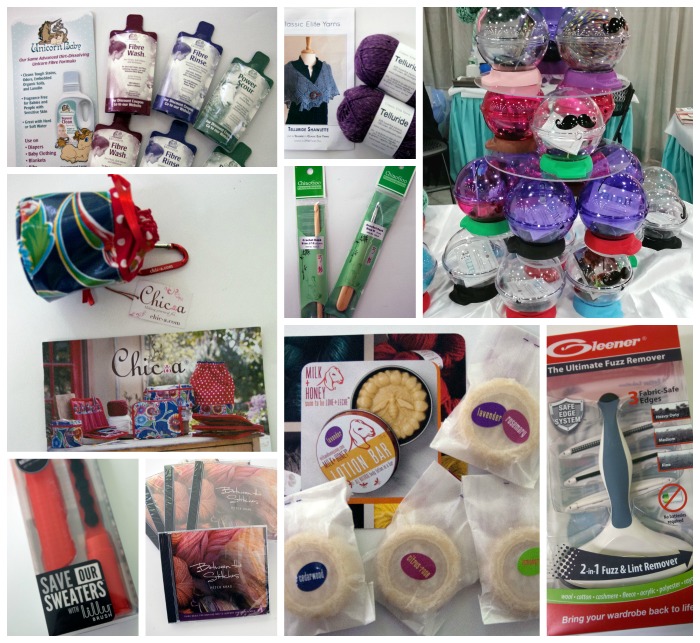