Subscribe to the Moogly Newsletter!
You are here: Home / Video Tutorials / Techniques and Tips / How to Thread Small Button Holes with Yarn – and No Needle!

There are a few different projects and patterns here on Moogly that call for buttons. And adding the right buttons to nearly any project can up it’s appeal! But sometimes the right buttons come with holes far too small for a yarn needle – and digging out matching sewing thread and the tiny sewing needles might not seem worth the effort. But there’s a quick, easy, and free way to thread small button holes with the yarn you used for the rest of your project! 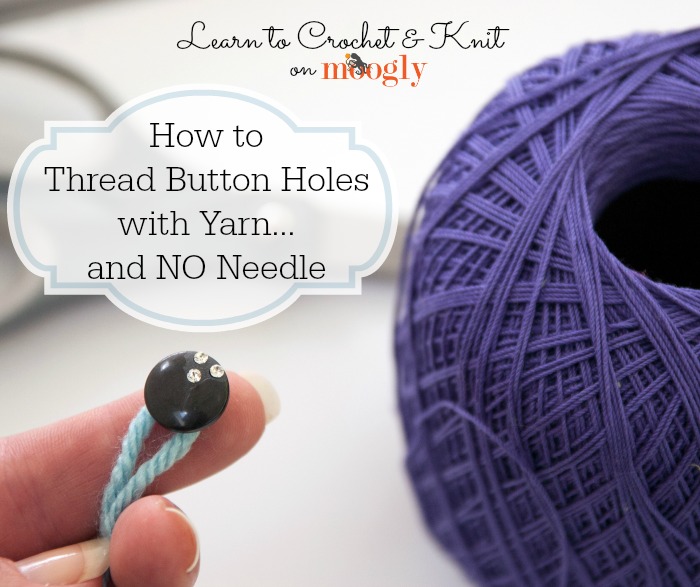 The button shown in the video and photo tutorials below is a leftover from the Get Whale Soon Tissue Box Cover. I didn’t want to try to find matching thread and sew on the buttons, especially for such a quick and easy project. What I wanted to do was use the yarn I was using for the rest of the project, and just weave in it with my yarn needle with the rest of the ends, without having to worry about thread peeking through and ruining the look.

But the shank on the back of these buttons was way too small for any of my yarn needles – even my Susan Bates Finishing Needles, which fit through nearly everything else. So I used this quick and easy trick!

How to Thread Small Button Holes with Yarn Video Tutorial

In this tutorial I used some random unlabeled crochet thread. But if you don’t have crochet thread, then run to the bathroom and grab the dental floss! The key is to use something that’s thin, but has a bit of stiffness to it – not drapey and thin like sewing thread. You need to be able to thread the hole in your button without a needle – as if you were stringing beads.

Cut a length of thread or floss, about 12″ long. Thread one end through the hole in the button.

Thread the other end of the thread or floss back through the hole, so that it forms a loop on one side and both ends are sticking out the other side.

Carefully thread your yarn through the loop of the floss.

Pull both ends of the floss, so that the loop comes through the hole in the button, pulling the yarn with it!

And that’s it! Carefully pull one end of the yarn on through and you’ll be ready to sew your button on using yarn – and it’ll be more secure and sturdy for it too. You can use this trick with buttons with shanks, or buttons with multiple holes.

I hope this tutorial has helped you out with your future yarny projects! I know it’s one I love having in my arsenal. If you’ve got other such things you’d like to see a video tutorial for, please let me know!

Thanks for reading! Get more Moogly on Facebook, Twitter,G+, Tumblr, and sign up for the free weekly email Newsletter so you don’t miss a thing! When it’s time to get your crochet swag, check out the Moogly Zazzle Shop!