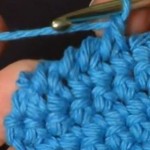 Reverse Single Crochet (RSC), also known as the Crab Stitch, is a great, modern edging for your work. Perfect for everything from blankets to bags, it gives a firm edge with real visual interest. It takes a bit of practice, but it’s worth it. And now there’s a moogly video tutorial!

How to Crochet the Reverse Single Crochet/Crab Stitch – Right Handed

How to Crochet the Reverse Single Crochet/Crab Stitch – Left Handed

So as you can see, the Reverse Single Crochet is worked from left to right, and while it takes some practice, it’s a great stitch to have in your arsenal. It is hard to crochet into though, so it’s generally used for edgings and borders. Give it a try! And thanks for watching.

Be sure to check out and like the moogly Facebook page to get the latest updates, links, and sneak peeks. Moogly is also on Pinterest, Twitter, Tumblr, and now Google+  – come join the fun! Tam[email protected]