Subscribe to the Moogly Newsletter!
You are here: Home / Video Tutorials / Advanced Stitches / Linked Double Crochet in a Spiral

Since sharing the Linked Double Crochet and Linked Treble Crochet tutorials, I’ve been asked how to work them in the round. I’ve only seen one pattern where linked stitches were worked in rounds, and the joining technique to avoid a hole was rather difficult – despite practice I never could make it look good. Luckily, it’s much easier to work linked stitches in spirals. Here’s how I do it. 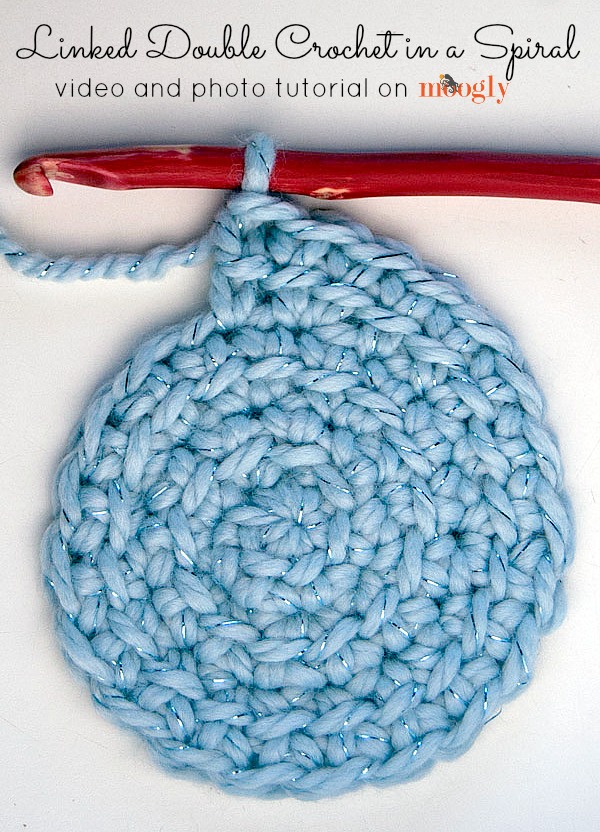 This video and photo tutorial was shot using Lion Brand Thick & Quick and a 10mm hook from Craftwich Creations. The stitch can be worked with any yarn and the appropriate hook size, with any number of stitches needed to create the pattern you’re working. To start, you can go with the Magic Circle, or your favorite method for starting to work in the round.

The theory behind Linked Double Crochets worked in a spiral is simple. If you were to start right off with a ch 3 and linked doubles, like you would if you were working in rows, then when it came time to work in the spiral you’d have a big gap or jump as you go to the second round. To avoid this, you can work a few single crochet stitches first: 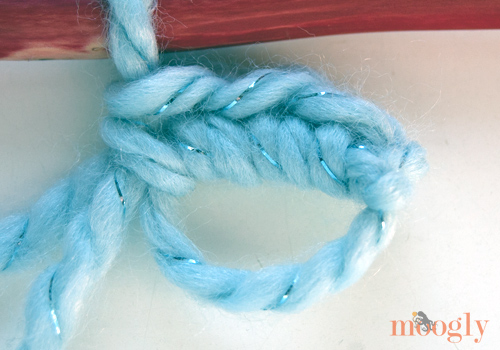 There are no hard and fast rules about how many single crochet stitches to work at the beginning.  I went with 3, but you can experiment a bit to see what works best for your project. After you’ve made your single crochets, work one regular double crochet, and place a marker in it – this is the first official stitch of the first round: 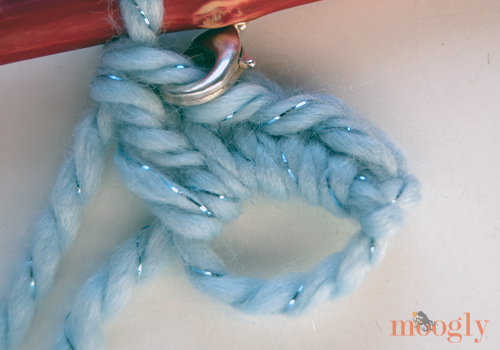 Now it’s time to work the linked double crochets. How many of these you’ll work into the ring is up to you, and depends on several factors, including the yarn and hook size you’re using and what sort of project you’re making. Don’t be afraid to try things out, frog, and try again. In the video I starting with 10 doubles in a round, and in the photos I went with just 7, but 12 might easily work better.  Since here I went with 7, you’ll actually see only 3 linked doubles worked into the ring: 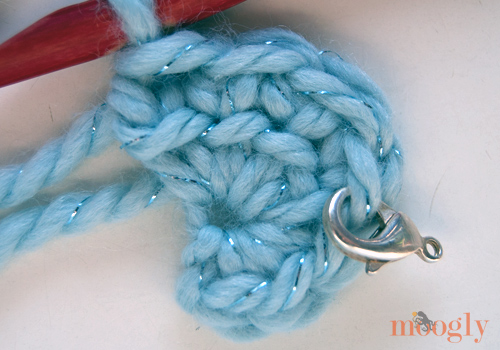 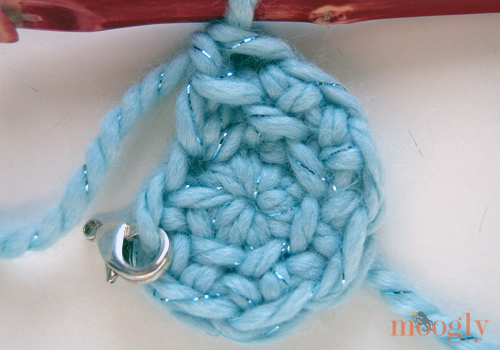 Now it’s time to work the first stitch of Round 2. Remove the stitch marker, and go ahead and make a linked double right in the top of that first double crochet from Round 1. Replace the marker in this stitch – it’s the new first stitch of the round! From here, you’ll just keep working linked double crochets.  Increasing in the standard way, you’ll add 10 (or 12, or whatever number you started with) stitches in each row. This will give you a flat spiral. If the spiral is cupping, try adding more stitches in the ring at the beginning. If it’s ruffling, try adding less. Crochet is an adventure! When it’s time to end the project, work a couple of shorter stitches until you can slip stitch and finish off. 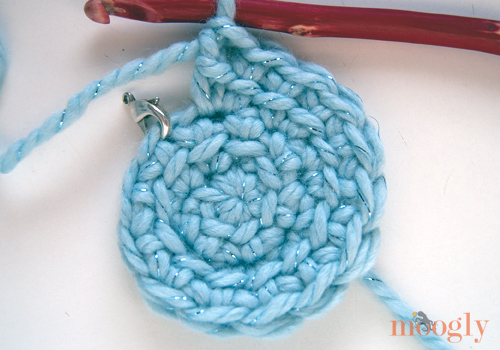 I hope this have given you an idea of how you can use linked stitches to work circular or in the round projects, without any gaps. It’s a fun technique to play with, and very inspiring I think! I have a couple of fun ideas percolating for sure!