Subscribe to the Moogly Newsletter!
You are here: Home / Archives for sc

Decreasing in crochet is usually done in one of two ways. The most common is working “2tog” – where you make the first half of the stitch in two stitches, and finish them as one stitch. The other common method is to just skip a stitch all together! But there are times when these methods just won’t do. They might create a lump, leave a hole, or just plain not look right. Enter the Invisible Decrease! 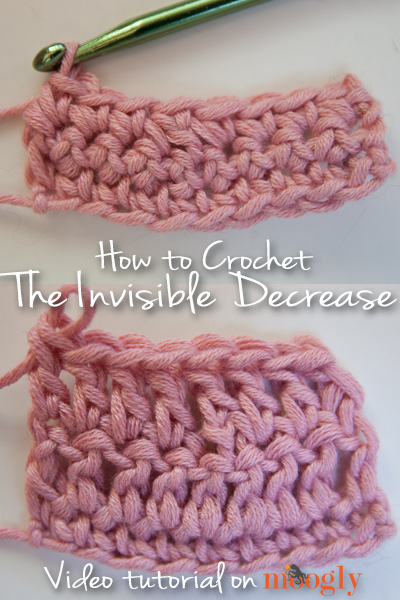 END_OF_DOCUMENT_TOKEN_TO_BE_REPLACED

Learning to crochet doesn’t have to be a struggle! Learning to chain is the first step, and learning to single crochet is step two!

How to Crochet the Single Crochet: Right Handed Version

How to Crochet the Single Crochet: Left Handed Version


When working a row of sc, you want to start with a chain that is one stitch longer than you want your finished project to be. In the video, I start with a chain of 11, skip the first stitch, and could make 10 single crochets – though I end up stopping at 6 for the sake of time. That turning chain at the start of each row is never worked into – it just hangs out there at the side, giving you the height for your stitches but never acting as a stitch itself.

Of course, by “never” I don’t really mean never – there are always exceptions in crochet! Breaking the law, breakin’ the law! Ahem. But it’s VERY rare to work into that turning chain, so until you come across that rare exception, you can assume it’s a hard fast never. Until it isn’t. Isn’t crochet fun?

If you find that your chains are hard to get the hook into, try relaxing your tension while chaining, keeping your stitches loose so they’re not “tugging” off the hook. Another alternative is to use a larger hook size for the chains, and then switch to a smaller hook when starting the single crochets. Experiment and find what works best for you!

So now you’ve graduated from “snake” and “ribbon” projects! What can you do with just a single crochet and chains? Some great beginner projects would be a dishcloth, a simple pouch, or Tag It (a free pattern here on moogly). Just remember to count those stitches, and don’t be afraid to pull them back out again!

Thanks so much for watching? Is there a video tutorial you’d like to see that isn’t here on moogly? Let me know in the comments! I’m always adding to the list!

Be sure to check out and like the moogly Facebook page to get the latest updates, links, sneak peeks, and more! Moogly is also on Pinterest, Twitter, and now Tumblr – come join the fun!