It’s time for January’s Designer Showcase! I like to wrap up each month by having one of my favorite designers share a bit about themselves, and then I follow it up by sharing my 5 favorite free patterns that they’ve designed! This month I’m excited to share some things from the lovely Candy Lifshes – the blogger and designer behind Meladora’s Creations! 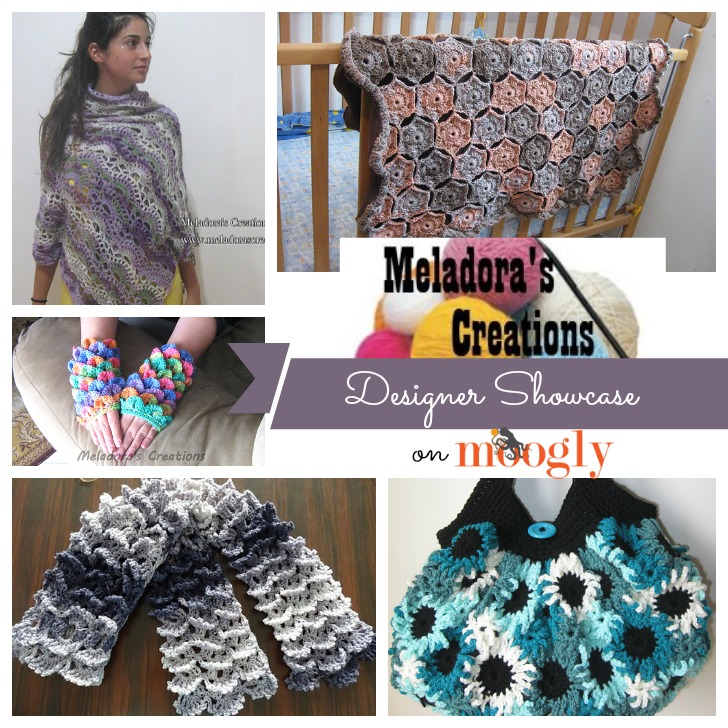 Candy’s story is fascinating, and her designs are fantastic, and often include video and photo tutorials! Here’s a little about Candy in her own words:

Hi I’m Candy from Meladora’s Creations, I do free crochet patterns and tutorials on YouTube. Allow me to tell you about my beginning story of how my life started and then where I am today. It hasn’t always been roses but I came out smelling much sweeter on the other side.

It’s kind of a long story how I got on this road to teach crochet, but I will give you the short version. I grew up in an abusive home. Not as bad as some, but worse than others. Given this past my twin brother has refused to take control of his life, and me too there for awhile. I moved out when I was 17 and I got married at the age of 18 to get away from that house, and my twin brother came over almost everyday. We had many years of abusing drugs and alcohol, trying to forget our past and going no where in the present. In time I started to grow out of that life, and the whole situation of my life and marriage. I wanted to get out. The only shining light in my life was my mother. She’s the one who taught me to crochet when I was 5 years old. She died of breast cancer in 2005 and that sent my life into a tailspin. Before she died, to say I was living to die would have been an understatement. But when she died I hit rock bottom. Coming to the full realization of my life. Unhappy marriage, being sick all the time because of drinking, my abuser being the only parent left.  I decided I needed to change my life. So I started to go out to visit more family and friends, so I wouldn’t be idle and want to drink or do drugs, and one day while visiting my older brother, he showed me this online game he was playing. I thought it would be a great way to get out of the house and keep me busy, so I started going to his house to play this game. And on it I met a man.

We became friends and was soon hanging out all the time online. It wasn’t until much later that I found out he was from Israel! My heart sank, because all hopes of maybe meeting in person was destroyed. I fell into despair feeling that my chance at a better life was vanishing, feeling stupid for letting myself hope at all.  But as time went on, my dad’s leukemia got worse and soon, he too was in the hospital dying of cancer just one year after my Mom’s death. This friend online became the only lifeline to get me through all these conflicting feelings about my father and what I was going through during his death. Even though I felt my Dad didn’t deserve my support or caring because how he treated us kids, but he was my dad and was dying, so I struggled with this.  But my friend was always there and got me through it. Once my father died, I felt an end to my troubled past start to form. I realized the only thing keeping this alive now was me and I needed to get away from everything that made me unhappy and start again. I divorced my husband and moved in with my sister. Me and my friend continued to talk for another 8 months, til I couldn’t imagine living life without him. So he bought me a ticket to Israel, and I stuffed whatever meant the most to me into two suitcases, and got on the first flight to Israel. This was the first time I had ever been on a plane and here I was, flying half way around the world. A little over 18 hours later, we met.

How I came to make Meladora’s Creations:

In a new country where I didn’t speak the language and had only a 3 month visa, I had to leave the country and fly to Turkey for a few days so I could come back to Israel with a new visa. There I was alone in Turkey with 3 different currencies in my pocket and nothing to do but think. Once I got back to him in Israel, at the end of the month we found out I was pregnant! It was a trying time of course, I was only on a 3 month visa, but we worked hard to get me to stay in the country, I did have to go to Turkey again, but he came with me the second time! When we got back I started Hebrew school. I remember walking down the halls of my school thinking to myself. If someone would have told me a few years ago that I would be in Israel learning Hebrew and pregnant, I would have thought they were crazy! Yet here I was. I didn’t learn much Hebrew before my daughter was born and I was a stay at home mom with no visa to work, so it was just me and my baby girl Lilly.

I said I would make this story short, so years later now, we are married (crazy story) and have 2 kids (yet more stories) but all in all my Hebrew is still not good and I needed to find something else to do for a living besides English telemarketing, cause I’m not a pushy person and I hated that job. So doing what I love, crochet, I ran into some crochet tutorials on YouTube. After making a few videos sharing some of the things I made, people were urging me to make a tutorial. So I gave in and tried it and loved it! Now I have many tutorials and even made a website to post the patterns and tutorials, making it as easy as I can. Most of my patterns come with pictures and step by step instructions. Those new to crochet can come and learn how to read patterns and watch me do things step by step. I hope when you find me that maybe you will find a project that you like and can make for someone that you love.

Now the love for my children and crochet  have given me my passion and drive back in life. I can truly say in all honesty, that now I live to live.

Candy has some lovely designs! Here are 5 of my favorite freebies on Meladora’s Creations: 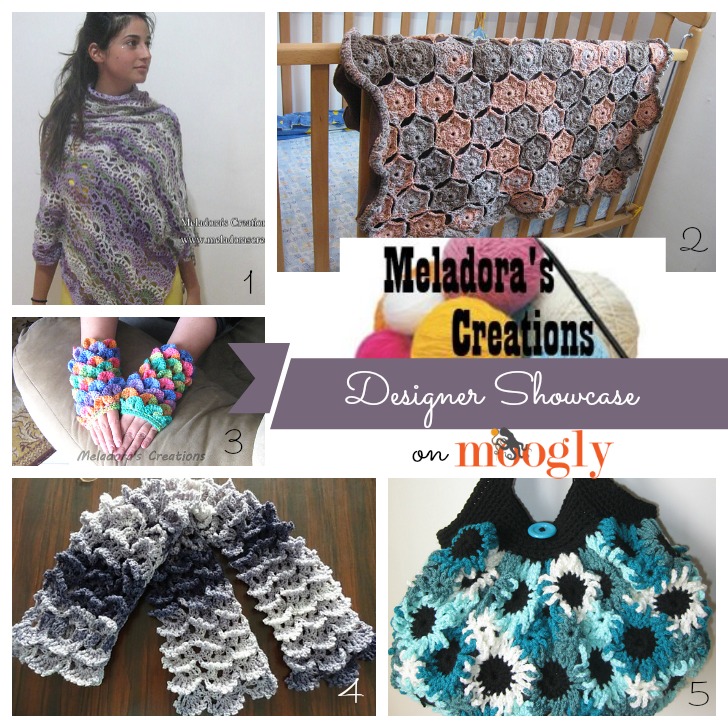 Thank you so much to Candy for being featured in the first Moogly Designer Showcase of 2016! Be sure to check out Meladora’s Creations for more great crochet!