Subscribe to the Moogly Newsletter!
You are here: Home / Links Links Links / My Review: Crochet Saved My Life

While there are a myriad of crochet sites out there, one of the real standouts is Crochet Concupiscence. The creation of Kathryn Vercillo, this site is a fantastic resource for crocheters of all skill levels and interests. There she blogs about news, fashion, design, art, community and all things crochet. It’s been wildly successful, Kathryn’s decade of professional writing experience making it a joy to read. 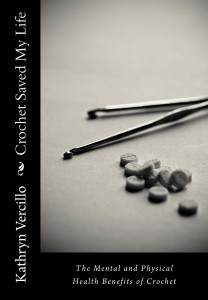 So when I heard that Kathryn had written a book, I was intrigued. When I heard it was called Crochet Saved My Life, I was excited! I know I’m not alone when I say that crochet has gotten me through some tough times. In this book, Kathryn relates her own battles with debilitating depression, and how crochet, along with medication and therapy, helped her climb her way out. In Kathryn’s own words:

…by the time that I reached the desperate stage of readiness where I would accept any help of any kind (despite feeling certain that nothing could ever help) the problem was nearly out of control. I was barely functioning. I cried most of the day every day. I could hardly move. I could hardly breathe. The idea of trying to make doctors’ appointments or hold down “real” jobs was so far-fetched it may as well have filtered into my mind in another language. I couldn’t do almost anything and yet the one thing that I could do was to move a crochet hook back and forth through yarn, repeatedly pulling one loop through the next to create fabric out of air so thin I could barely breathe in it. Since it was one of the only things that I could do, it became imperative to my mental health that I go ahead and do it. When I first started to crochet, that feeling of temporary relief from the muted chaos of depression was the only reason I was crocheting.

Of course, this thin thread of hope turned into a passionate hobby, as it has for so many of us. And as Kathryn recovered, blogged, and crocheted, she discovered that she wasn’t alone. Crochet Saved My Life doesn’t tell just her own story – there are tales from others who’ve used crochet to help them deal with Fibromyalgia, OCD, schizophrenia, unemployment, post traumatic stress disorder, cancer and more. A few quotes:

“What I didn’t know until fairly recently was how meditative crochet can be. Being able to have a small crochet project to work on anywhere – at home, on the bus, while waiting in line – meant I could create a quiet space in my head whenever I had a few minutes to spare. Those small quiet spaces can add up to a lot over time.”

“I tend to believe the claims made for the health benefits of crocheting – it is good for stress management, strengthening the immune system, regulating blood pressure. I can only testify to its help with depression, but as a cancer survivor, I consider continuing to crochet part of my general health plan.”

“During one of my last OB appointments my doctor said to try to bring something in the delivery room that would put my focus on something other than childbirth, and maybe that would help. I immediately decided to bring a crochet project. It definitely helped take my mind off of the pain.”

Crochet Saved My Life discusses how crochet can be a healing tool used by individuals as well as in group settings. It outlines the specific therapeutic benefits and uses of crochet, making this an invaluable resource for occupational therapists, mental health professionals, and teachers – even those who do not crochet themselves.

Over 17 million people crochet, and many of them have found more than a hobby in the 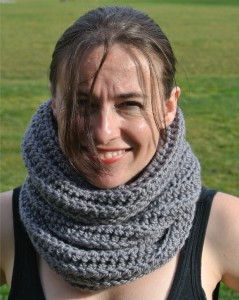 humble hook and string. For some, that yarn was a life line, and Kathryn Vercillo has shared their story as well as her own in Crochet Saved My Life. An enthusiastic member of the DIY movement, she decided to self-publish her work, and it’s currently available for sale at the following links:

Crochet Concupiscence has been honored as a 2011 runner-up for a Flamie award for Best Crochet Blog and voted one of the top 5 2012 craft blogs in Inside Crochet Magazine.

Disclaimer: I was not compensated for this review, and all opinions are my own.